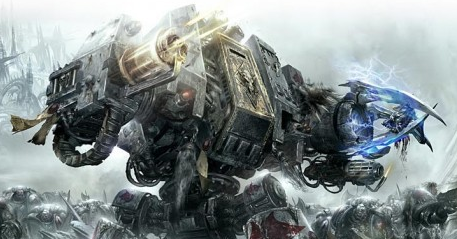 There is a ton of codex information rumored to be from someone that had a few moments with the codex. Of course not everything could be figured out, but we also have a pic leak of an image for next week's Dreadnaught BjornMurderfang Pre-orders.


Here is the leaked image link, the link was sent to me, so I dont know at this time where it originated from. It looks like these links are from Warseer, but hard to verify at this moment.
http://i.imgur.com/VlD9XUB.jpg
and here
http://img.tapatalk.com/d/14/07/27/umase6ep.jpg

Here is the rest of the information. Please remember that this is still a rumor.

I went through and removed the point costs. You can follow the link to warseer, who is apparently allowed to show them.

via Little Bird on Warseer
http://www.warseer.com/forums/showthread.php?397904-Codex-Space-Wolves-Information
Keep in mind: My source only had a few minutes alone with the book, and there is an enormous amount of information in a codex, so they couldn't get everything. If anything more makes it to me, I will edit the OP.

'Space Wolves Unleashed' Detachment FOC:
Identical to standard FOC, except may take up to 6 HQs
May re-roll Warlord Traits
Each unit joined by an Independent Character rolls a d6, on a 6+ that unit gains Outflank. Troops choices get +2 on this roll.


Logan Grimnar - Lord of War
Epic new model, comes with a sort of grav-chariot called 'Stormrider' pulled by two enormous Fenrisian wolves, but he can be used without it as well.
Stormrider
Treated as a vehicle, didn't get AVs, has a 4+ Invulnerable save and cannot suffer Penetrating hits (all Pens are reduced to Glances).
Gives Logan 4 S5 Ap- attacks on a turn when he charges.
Logan loses Deep Strike if he takes Stormrider
Lots of other cool rules, but didn't get those.

Njal Stormcaller
No new model shown in codex
Looked to be mostly the same, no specific information

Ragnar Blackmane
No new model shown in codex
Also looked to be mostly the same, no specific information

Ulrik the Slayer
No new model shown in codex
Also looked to be mostly the same, no specific information

Canis Wolfborn
Again, looked to be mostly the same, no specific information

Bjorn the Fell-Handed
Epic new plastic model, part of a box that makes a regular SW Venerable Dreadnought, Bjorn, or a new special character Dreadnought named 'Murderfang'.
No longer becomes a VP objective when he dies.

Rune Priest
Mostly the same.
Specifically noted as starting at Mastery Level 2.
No other information.

Lukas the Trickster
No specific information, probably the same.

Grey Hunters Pack
Any model may add a Close Combat Weapon for +2 points
One Special weapon per full five models still, but costs raised to same as C:SMs
Wolf Guard Upgrade available
May take a Stormwolf as a Dedicated Transport
No other information

Dreadnought
Not sure, but might have an option for a Helfrost Cannon
Otherwise similar to old codex, no other information

Venerable Dreadnought
Definitely has an option for a Helfrost Cannon
Can also have an enormous Power Axe and Storm Shield, said to look incredible.
Some special rules, but didn't get them

Iron Priest
No new model shown in codex
Options appeared to be nearly identical to old codex,
Can take a unit of 1-5 Servitors, rules also looked the same as old codex
No other information

Lone Wolf
Rules nearly identical to old codex, didn't get points cost
Owning player no longer gains a VP if they die
No other information

Wolf Guard Pack
This unit is just for Wolf Guard in Power Armor.
Have a similarly wide array of options as in the old codex, couldn't get specifics though
May take a Stormwolf as a Dedicated Transport

Wolf Guard Terminator Pack
What it says on the tin, Wolf Guard in TDA
with Storm Bolter and Power Weapon base
Options (any model in the unit can take these, this isn't all of the options though):
Thunder Hammer & Storm Shield
Pair of Wolf Claws
Power Fist
Frost Axes
Frost Sword
Combi-weapon
Heavy Flamer
Assault Cannon
Cyclone Missile Launcher
May take a Stormwolf as a Dedicated Transport

Swiftclaw Pack
Otherwise similar to old codex, no other information

Thunderwolf Cavalry
Otherwise similar to old codex, no other information

Transport:
Transport Capacity - sixteen models
Fire Points - none
Access Points - One ramp at the front of the hull

Transport:
Transport Capacity - six models
Fire Points - none
Access Points - One at rear of the hull

Helfrost - If a model suffers one or more unsaved wounds from this weapon, it must pass a separate Strength test for each wound suffered or be removed from play

Long Fangs Pack
Couple of new options for squad leader, who is now called a 'Long Fang Ancient'
Source did not get if they had an option for Flakk Missiles
Might be able to take a Stormwolf/Stormfang as a Dedicated Transport, not sure about this though
Otherwise nearly identical to old codex, no other information

Rhino and Razorback
No Helfrost Cannon option for the Razorback, same as Codex: Space Marines