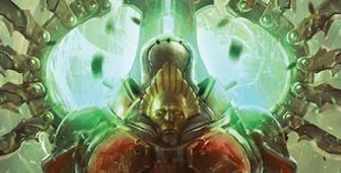 Its nice to get a little spoiler once in awhile about Dark Age, and here it is......... Dark Age has revamped its tournament system.... you know, the one that if you win, you can have a model created in your own image or that of your choice for the game. Here is a preview of what is coming to Gencon for Dark Age


Here is the latest..........
There will be over THIRTY new models for pre-release/general release at GenCon.

Not only that, but Dark Age has revamped its scenario and tournament system. The document is supposed to launch during GenCon, and will feature around TEN Primary Scenarios, with a Secondary Objective Deck also being released that contains THIRTY Secondary Objectives.
7/18/2014
Natfka
Dark Age, Events, News Headlines