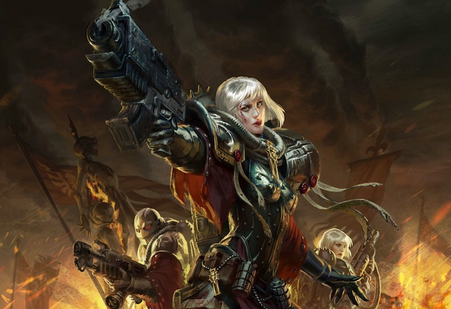 40k Open Day brought out quite a bit of information in the seminar sessions. Here is another good detailed report on what was said.


via Gaz Taylor on Dakka
I went to the 40K Open Day and went to both seminar sessions, and I just thought I would mention a couple of things that came up over the course of the day.

New Stuff
Frankly, there was nothing new apart from a few things from Forgeworld. They could only discuss what has been released, which in this case was about Santcus Reach. There wasn't many questions about this in the seminars I was in apart from a discussion about campaigns.

The Release Schedule
They spoke a little bit about the Release Schedule and why they have switched to a weekly one, with Phil Kelly saying he was amazed they haven't done it before. This allows them at the studio to bring out more content and pick up different things, rather than concentrating on an army block at a time and trying to shoe horn things into the release.

If you read between the lines, you can see this is one of the reasons why we now have unbound armies in 7th edition as it allows them to work on something which they get an urge to do and then release it, instead of sitting on the idea for a few years. The impression I got from the seminars that a lot of the content was driven by the writers/sculptors now and would be based upon things they wanted to work on.

They briefly touched upon things which might happen. For example, somebody asked about Sisters of Battle and Jez said while he would love to do something for them he wasn't sure it is something that would happen soon as an army, as he would really want to commit to the project like he did with Dark Eldar. He didn't rule out a Dataslate and possibility of a plastic kit but not sure if this is him thinking aloud and is something he wants to do, or if it is something he is working on. A few more things that were mentioned....

Timeline - The usual timeline question was brought up (by GW as a warm up question). Will the timeline move forwards? No as they like the tension that is being built up at the moment. They will however look at past battles and explore those more with new models and formations/lists. The Eye of Terror campaign was mentioned and it was asked why they backtracked the story. The answer was they liked how we are at the cliff edge and not sure what could happen but it looks grim, but they also said they weren't happy with how players could submit fake results.

Primarchs - Somebody asked about the 'missing' Primarchs and Daemon Primarchs and Phil said if you looked at the Chaos background now, it was a possibility of the Daemon Primarchs appearing more due to the path Abbaddon is forging to try and expand the Eye of Terror past Cadia. So there is a chance they might bring out something covering a battle where a Daemon Primarch appears....

Speed Freaks - This was said quite a few times, so I suspect we may see something about them coming out at some point

Missing Models - Somebody asked about missing models such as the special characters from the Nid codex. Jez pointed out that technically they weren't missing but the reason they weren't included was because they didn't want people buying a codex and wanting to use something from it they couldn't buy from the store. However he did say that good ideas weren't thrown away and they do get looked at again. I took this as a hint we may see a model at some point and some rules. Somebody did say what about Farseers on Jetbikes, but they glossed over this which is not surprising considering the Chapterhouse legal battle!

Freedom of 7th Edition
There was a discussion about why they went down the route of making 7th edition as open as it it now and it bubbled down to the fact that they wanted to empower you the gamer to have fun. Jes Bickham spoke about his experience at a Throne of Skulls and how he had brought a Imperial Knight army and stomped over everybody and said he was pleased he did well at the event, he didn't really enjoy all of his games due to him just whitewashing his opponents. He then spoke about how when playing a game you are entering a social contract and how it would be a good idea to be considerate for your opponent about what you both want from the game. You want to use a filthy list but your opponent doesn't? Does this mean that you will both get an enjoyable game or maybe you should both think about what you want from the game?

And this is one of the reasons why they went down the freedom route. They want you to be able to create scenes from the books or come up with crazy scenarios, but also play really competitively if you want to. It's all down to you to decide what you want from the game.

Games Day
Games Day is a thing of the past now but they are running something called Warhammer Fest! It's basically Games Day but over two days, with Golden Daemon being held on the Sunday. Tickets are £20 each day and it's on 18th/19th October and being held in Coventry.
7/22/2014
Natfka
Events, News Headlines