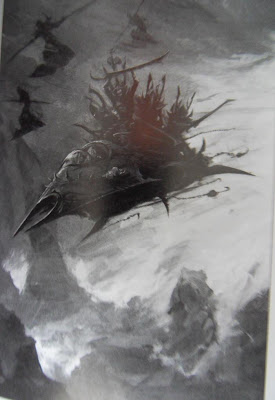 This rumor conflicts with a few others on the time line for our next Dark Eldar releases. That's OK though, because these are rumors and not announcements. The latest gives pushes the venom out of April and into June. This is the biggest change (which could just be GW altering release plans, or they weren't sure to begin with).

Here is a link to the conflicting rumors that we had earlier on a timeline for the next Dark Eldar release schedule. http://natfka.blogspot.com/2011/03/dark-eldar-2nd-wave-release-schedule.html

Now also do not forget that we had a vague GW Announcement of Dark Eldar in June with a couple of pics. So we know something is coming in June. The only thing I wish Frgt/10 would of expanded on, is my Grotesques. He says these are not happening in June, does this mean they are coming in May?

Here is the rumor; Take with salt please.

*Unsure whether the flyers will be 1 kit or 2 at this stage
All fairly obvious stuff that we all speculated about a while back, but I'm just putting the 100% on them now.

No idea (yet) if there will be any metal models for this wave.

Wracks/Grotesques/Haemonculi are almost certainly NOT happening in June (99% sure on this one)
4/06/2011
Natfka
Dark Eldar, Rumors