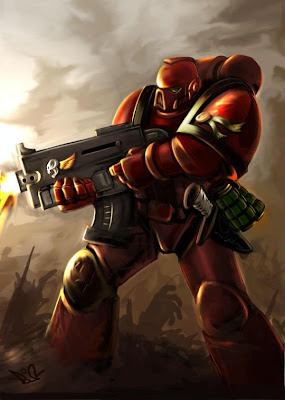 This week seemed like it was a little light for me in the warhammer 40k side of things. I mostly worked on models tryingto get things ready for the tournament this weekend. I was very dissapointed that I was not able to get my dark eldar ready in time. There were also the normal rumors floating around, mostly of Tyranids and Necrons.

Necrons
While I really do not have much interest in playing Necrons, I still am hanging on edge to hear anything new.  The inclusion of two new heavy support choices in todays rumor was nice to wake up to. The Necromancer sounds like it will be a close combat monster.

I suppose with the new Lords, just charging into necrons blindly will be a thing of the past. Currently the only thing I ever really consider when playing necrons is what their count is before phase out.

Tyranids.
This was the most welcome rumors this week. Tyranids need their second wave. They probably even need a third wave. I think the ball was dropped on the tyranid models, and that they too quickly jumped to something else. Games Workshop is doing an excellent job thus far at getting us Dark Eldar models, and I hope they complete them soon. But afterwards, lets please get on to some tyranids and thunderwolf calvary.

My Dark Eldar
Modelling frustrations all week long. Trying to get too much done too quickly, that I finally had to pull the plug, and say no more. I will start up again later this week after a brief reprieve from modelling. My biggest concerns are the Grotesques. With no real size comparison, it is a hard call to make on how big these models will need to be.

I will be making another run to get more paint this week, as well as some trades for some more terminator bases. I probably also need to make a quick run to the outdoor store for some more hooks on a few pieces I am not quite happy with.

Tournament at Knightfall Games
Jake down at Knightfall Games ran a smooth tournament this weekend. It went well, and the people I played made the games fun. They were Travis (a favorite of mine to play), Ebin (forgive my spelling), and John. In order Orks, Space Wolves, and Imperial Guard. The tournament went off without a hitch. The missions were challenging, albeit a little difficult for the army I was playing, I will post more on the tournament later in the week.

Something Just Appeared in the Sky
For those of you that live in Oregon or the Pacific Northwest, something just appeared in the sky. It also turned a funny color this morning, and I am not quite sure what dark omen it is telling. The object in the sky is a bright yellow orb, and the sky turned an odd light blue in all directions.

Joking aside, its time to get out of the hobby room, get some breakfast, and head outside.
4/17/2011
Natfka
Presence of Faeit