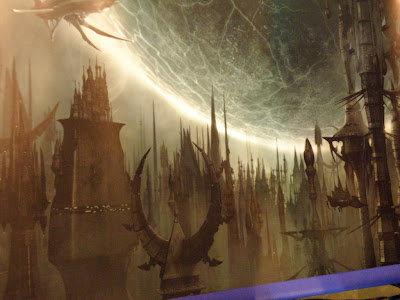 The infamous portal block is a bane for quite a few Dark Eldar players. I am going to say apparently, because I haven't yet had someone successfully stop mine yet. There are some very good ways to block a portal, and I figured doing a post might just get some of these methods people are using out on the table. I will do a quick one on how I tend to deploy my portals, and then by all means if you have had someone block your portal, speak up and tell us how.

What I don't want to hear is theorised counters, or "I would do this to your tactic". I want to hear from Dark Eldar players how their portals have actually been blocked in a game. This means that they must block it in the first two rounds of the game. Later blocks mean nothing really.

First things first. If you really fear a portal block, there are many pre-emptive things you can do to prevent it. 90% of all players will simply not attempt it, if you remind them of what will happen when they fail. Having something inside your webways that can actually rip apart everything that comes near it is one. 3 Talos is generally enough for people to want to stay over 12" away from a webway. It is important to know what the enemy is capable of before deciding how you are going to place your webways.

Round 1 multiple portal deployments. Deploy multiple portals within 12" of each other. This common sense approach is called supporting each other. You block one, and my scourges or reavers can still use it, while my Talos or multiples there of, come out from the other one, and get to kill a ton of your models. I am a 3 portal user in my lists, and my third is often set on a flank in round 2 in vital vulnerable location elsewhere. The third portal is flexible, place it when and where you need it.

Vect is also with the unit that I have been using to deploy two portals. Sideways raider, wide deployment of the grotesques with a haemonculi on each end as far out as the deployment from the raider reaches. This means that Vect can eat anything that comes in too close and you have two portals in support of each other.

Blocking units. Hey, we have fast raiders. Use them to fly out into the path of potentially blocking units. Make it so they cannot get around to your portals.

In case of an complete deepstriking list, deploy your portals closer to your board edge, or within assault range encase the portal does get blocked.

Above all else, when playing a webway list, I prefer to go first. Webway placement is the most important thing early game as it controls deployment of my reserves. Vect is my biggest tool when playing the webway game. Go first, chances are you will control the flow of the portals, Go second deploy making sure that any blocking threats are dealt with, and then attempt to seize.

This is a learning curve for all of us, so please comment on past experiences with webways.
4/13/2011
Natfka
Dark Eldar, How we play the game.