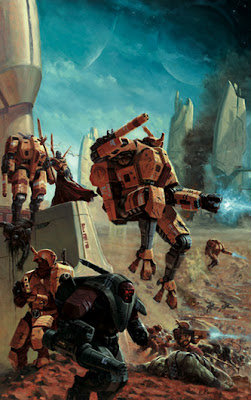 Today is Friday, incase you havent heard. While everyone is taking a close look at their elites in their armies, I saw a decent Tau rumor compilation that might have some new information on it for some people. I beleive I have heard everything on this before, however, not all of it in one place.

Please remember to take with salt. These are rumors.

2. Kroot to get own transport (Devilfish will no longer be able to transport Kroot)

5. Firewarrior carbine to get a grenade launcher (either explosive or EMP)

6. Vespids reworked and getting a Heavy unit

8.Crisis suits will get “hit and run” ability

14. New type of “Heavy” Battlesuit (new prototype of the Broadside)

15. Stealth suits will be changed to a advanced scout unit similar to Pathfinders