Sisters of Battle Models- What is on the Horizon 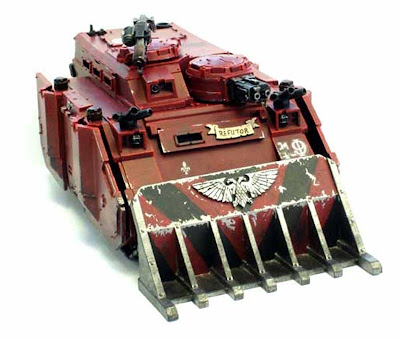 Here is another rumor regarding the Sisters of Battle. Its a nice one that seems to mostly be about the models taken from computer images of what they are going to look like. There is a big discussion with this one about inquisitorial symbols, and the most logical conclusion is that the author just got to take a look at the images, there could of been more, more that was not done, or any other conclusion when not looking at a finished product. The biggest thing to note, is what models are going to return with the codex. This gives us insight into what will be in the codex with what options etc....

These are rumors, so again, please take with a grain of salt.

Via Sexxy Camera
A few sisters of battle Tidbits.

Some info about the sister’s codex coming out this fall:

The Sisters of Battle codex is taking a step away from the old codex’s focus on the Inquisition, and is now more of a codex focused on the Ecclesiarchy. The codex will represent the sisters much more truly to their roots in the fluff, and the non sister codex allies have been changed accordingly. More than many codexes’, the new Codex for sisters really feels like a brand new Codex.

Ok, so let’s start with the sisters themselves.

Redone in plastic, the sisters look great. While they won’t look out of place with the sisters of the past, they look much more like members of the church, though the over all look of the armor is very similar, if more ornate. The box set comes with enough plastic to make five sisters, but while we are only getting five girls per box, we are gaining a host of new options. The box contains bits to configure them as either regular sisters or Seraphim, and has tons of cool little extra bits to really make each unit unique. Gone are the Inquisition =I=’s, usually replaced with the fleur-de-lis. I counted eleven heads total, with five helmets, five without helmets and one with a gasmask / respirator type thing. Each of the eleven heads was a unique sculpt. The entire kit just really shows how far molds and model making has come since the days when our old sisters were cast, and while I would have been the first to scream heresy a year ago if you told me the sisters were changing, I have to say that the new ones really look fantastic.

I would like to take a moment to talk about their legs as well. I have always considered myself a modeler/painter first and a gamer second and one of the things that always bothered me about the old sisters were their legs. Like all metal miniatures, moding them was hard, and no sisters really had dynamic posses. The new legs have me really excited because they are very dynamic. I guess I would best compare them to the BA legs from their recent release. They really offer a lot of options in terms of modeling and are really one of the most exciting parts of the kit, in my opinion.

For weapon options the kit comes with a flamer, melt gun, storm bolter and pistol flamer as well as two guns I didn’t recognize including a weird rifle type thing and some gun that looked like a pistol from the 18th century with a torch bracket jammed on the end. There is a right and left handed version of both the pistol flamer and the other weird pistol. There were of course bolters / bolt pistols and both a power weapon and some chain swords. What I really liked about the weapons was their level of detail and individuality. Even though they are the same war gear a squad of space marines might field every piece of equipment screams sisters, and while easily recognizable is quite different from their marine counterparts. I want to say the weapons are smaller, but they might just be sleeker. One of the bolters comes with a strap.

The last thing I will mention about this new kit is that the jetpacks for the seraphim look much more like, well, like jet packs.

The Penitent engine is back in beautiful, mod-able plastic, and thankfully the remained true to its old design in many ways. It has four different options for its two close combat weapons, though I believe they are just aesthetics, and comes with parts to mount either flamer’s or melta’s under its arms. Looking at the kit, I believe its legs are possible similarly to the sentinels as it has a ball joint for its feet and little nubs / indents at the joint in its leg, which is very exciting since that will give us a lot more options when it comes to dynamic poses. Along with the weapons you also get several choices for drivers 3 icon badge things from the major sisters’ factions. A few other miscellaneous pieces like a scroll plate and such finish off the fun little extra bits.

The repressor is finally making an appearance in plastic as well. It looks similar to the FW one, but has the turret reworked and a different dozer blade. It comes with quite a few options to sister it up, from the same three icons I mentioned above, though slightly bigger, to numerous scrolls and of course options for sister doors. The driver has options for a helmeted head or a regular bobcat sister head with a little microphone thingy.

There is also a kit for a new priest, which I could best compare to the empire wizard kit. Fantasy players will know what I am talking about. There are numerous heads from the bald friar look to the crazy bearded look. Additionally we have options for plasma pistols, bolt pistols, and flamer pistols as well as a book arm and of course a gigantic chain sword. The model doesn’t have anything in the way of armor, though the chain sword looks almost big enough that he could hide behind it.

Well that’s all I have for you for now. Sorry I haven’t much in the way of rules, and that’s always the really exciting part, but I though some folks might like to know a little bit about the new models.

#2
I got to see some CAD screens for some of the other sister’s stuff, but until I see a sprue for it, I don’t really want to post anything about it, since that stuff is still subject to change. I do want to see a new exorcist though, I don’t really care for the forge world one, and the GW one is nice but I don’t like hybrid models.

I have heard about a set for making another group of sisters with the heavy weapons and such, but I have not personally seen it so I don’t want to really speculate on its contents either until I see the pictures of the bits

I have not seen any IST models and besides some sculpts I saw what seems like years ago of shotgun guard guys I haven’t seen anything even close to that. I have not seen the rules so I will not pretend to know weather or not this is true but I have heard that IST were out of the codex, though there would be an option that allowed you to still use the models you have for them. But like I said, that’s just something I have heard so please don’t take that as fact. My guess would be abrites, but again that’s just a guess.
4/04/2011
Natfka
Rumors, Sisters of Battle