Home » How we play the game. » The Often Overlooked 5th Element 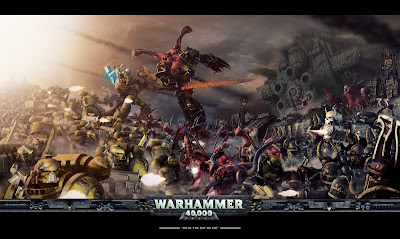 "Why am I having trouble with this list? Can you take a look at it for me". More and more people are joining the Internet crowd for warhammer. It really is not too hard to find someone at your local watering hole that is simply using a list that they had found on the Internet and having a hard time with it. There are a couple of truths behind it in most circumstances.

Number one, most Internet lists are not really that good (see how nice I was). Second, you are not that person that made the list. Meaning that the idea was not yours, you don't know it like the person that created it.

People often grab lists off the Internet and play with them for some time, before getting frustrated and changing the list. Even if this list won this or that championship, who cares. Most good list makers create a list that the units work well with each other. There are combinations with reason behind them. The reasons are often more than just.... This unit should be able to deliver this many hits (mathhammer).

For example. Hyrda Flak Tanks and Basilisks. One pops the transport, the other kills what was in it. That sounds simple enough for anyone to use it. However, deployment and mistakes on the field can often lead to such a simple concept going bad. For instance..... Player with Basilisks gets over confident in their barrages ability to take down vehicles, or does not use them with the same efficiency as they player that made the list. So instead the player tries to blow up a couple heavy vehicles with a barrage (not an efficient decision, since there is melta in this list designed to just that).

In essence, taking a list off the Internet and trying it out is no foul. However, realize that you are not that person that spent the time creating the list. They had specific roles on the field for each unit, and if you are not able to maximize the potential and concept the list was meant for, you will fail.

A person creating a list generally has lots of games under their belt, and a certain play style (everyone has one) that may not match your own. Their understanding of the game is different, and it is from a different perspective. An online list is a great place to start, however, not a great place to end. Play it, alter it, adjust it. Rinse and repeat.

I tend to enjoy a certain style of play. I call it "I punch you in the face, and while you are getting back up I destroy your army" In other words, I play aggressive and in your face 40k. I want you to have to respond to me, not the other way around.

Find your play style (the overlooked 5th element). Everyone is different, and is more important than your list. Play style should not only determine what army you play, but also how you play it.

If you are new, start simple. Spam useful units. Spam lists are very simple and easy to use, hence why they are so popular. Start simple, develop your play style on how you like to play. Find a couple units that you enjoy. Work your list up around them testing new units, and above all else..... Play your game and have fun. Losing is the best way to learn the game. I learn more out of a loss than I do out of a victory.

Sorry its so short and rushed, this topic deserves more, but I have a convention to attend this morning.
4/02/2011
Natfka
How we play the game.