Black Templar- Whispers in the Wind 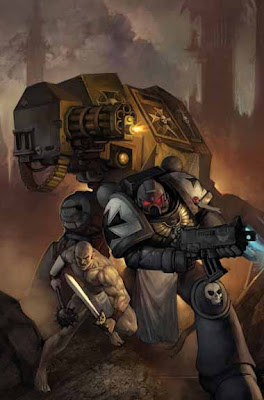 This morning, while packing up for the tournament, I happened across a discussion going on about the Black Templar. They are a little vague, and some of it conflicts with the order of things to come, but its a rumor nonetheless. If anything, I still think the order of things will be Necron, Sisters, Tau.... 6th edition.

I am going to assume that Black Templar might somewhere fit into the mix, but make sure your intake of salt on this one is quite unhealthy. Here is the discussion at hand with some of the earliest Black Templar rumors.


This is the discussion as I found it compiled by Kroothawk with Lord Castellan, Harry, and Eldargal

Lord Castellan
So what do we think the next codexes are going to be?

Necron of course, then Templar, obviously, but what else is coming down the pipes?

BT will be sooner. They already have models and artwork for the boxes and so forth. They will be before Sisters I can guarantee it.

eldargal wrote:
Doubt it, at the moment its neck and neck between Tau and SoB for who follows Necrons, none of the rumourmongers have mentioned hearing the slightest thing about BT. Some have even hinted they may not get a 5th ed codex at all.

Depends on where they get their sources. Seeing the models and artwork at the factory is pretty solid.

Harry's comment:
Sculpts have been around for at least 18 months. (and well worth a bit of saliva )

I honestly don't know the order they will appear ...
.... but if it helps, the order that I heard about them was: Grey Knights, Sisters, Black Templar.

Whilst I expect them to appear in this order .... This was a couple of years ago so anything could have happened in the development stages before release order was set in stone.

(Lord Castellan is a braver man than I ... I certainly would not be risking my todger on the table with a guarantee of anything!)

Sorry ..... I can't remember exactly when I heard about Necrons. I remember hearing about them at roughly the same time as I heard about sisters ... I seem to remember finishing off collecting my metal sisters army and buying a Necron battalion box and a monolith at about the same time. ..... I didn't mention them because they seemed to be generally accepted as being up next?

I just went and checked.
Last July is when I finally got it straight which was first DE or Grey Knights.
At that time ... after DE and GK I thought that Necrons and sisters were next ... but did not know which order.
I don't think that will have changed.
So I imagine these two will be next and Templars after that?
(If they are a full army release).
4/16/2011
Natfka
Black Templar, Rumors