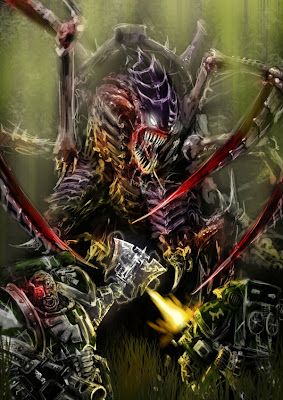 OK, seriously, it is about time we hear something about tyranids. Granted I do not play them, but information has been 0 of late and rumors had it that a second wave was coming this fall. Well, the rumors are back, as well as the rumored Wartorn Skies (summer of flyers) White Dwarf release for this summer. Here is something I dug up this morning since I have been starving for rumors the last few days.

via Stickmonkey The “summer of flyers” (again, temper this name, it’s not much more than spearhead was) article in wd if it happens will be an apoc expansion…not basic game. To include formations, special strategies, etc. About what anyone would expect.

The specific plastics for the wave release passed QA. Yeah! And include the following
Ig hydra

There may be a few other surprises. It is apoc after all.

However, no one seems to be certain if these items will be released together as a wave right now. There is a lot of back and forth as to how best to put them out…flyer related dump, or wait and do army based updates, meaning a ig wave, a de wave, etc. There is strong desire to complete the de models before the next codex release after GK. I don’t think it’s possible based on where some of the outstanding models are in the process…and what has to be done for that codex. Only so many people to do the work. You can’t put 3 women together and get a baby in 3 months, right?

No craft world eldar models will be included here. And there is a reason for it, but I can’t go into it yet. And no codex on immediate horizon, to keep people from getting excited…

Also, the de void flyer will not make a summer debut…its a big model…comparatively, and there are other challenges facing it…but it is coming eventually, hopefully before fall.

My information comes direct this time, but the decisions about what and when to release things I am not privy to…wd will already be set in stone by now and so someone(s) already knows what is and isn’t happening in this, just not I

Cheers. Hopefully this is more exact information certain individuals want to see. But as always, subject to change.

Lots of internal rumbling on a 2nd wave of tyranids. I don’t have timelines, but expect it to hit before end of year, but after dark eldar releases complete that codex.

First, a new tyrant model is soon to debut. It has options for the swarm lord. It has some slight differences from the current metal, but is basically similar. I do think it stands between an inch or more higher, but not as tall as a trygon. I did not have an existing tyrant to compare. Wings are supposedly in the kit, but I did not see those.

Second, a harpy has been done, and will either be in this release or in the “summer of flyers”

Next for plastic kits the tervigon is finalized. IMO it does not exactly meet the image in the codex, but if you squint it’s close. The model is nice and definitely fits the line.

This is where it gets fuzzy. The tyrranofex is not at all shaped or sized IMO like the tervigon model. I did not have them side by side to compare, but lot of Internet speculation these kits would be combined. I don’t see it. Some pieces like legs might have dual use, but I didn’t see sprue cuts to tell there. If they are one kit, it will surprise me.

No word on mycetic spores… Either way. I would place a bet they are also coming, but I don’t know anything solid.

For metals,
There is a doom and parasite sculpted. They look as expected. Doom is fairly dynamic, parasite is a bit bigger than I thought and will likely use the larger skimmer base.

Also someone mentioned old one eye is getting a new sculpt, but I don’t know how much faith I place in that one yet.