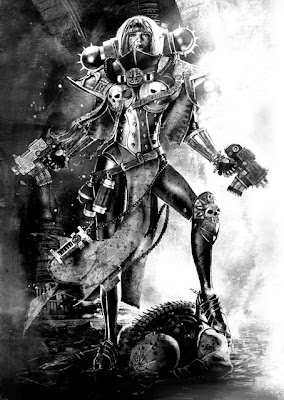 This week really was rather crazy. You have to contend with Aprils Fools Day, and the rumor mill. We had a leaked play test copy of the Sisters of Battle (4 pages long), and the rumors that Necrons, Sisters of Battle, and finally Tau will be out in short order. This weekend is also special, The Grey Knights are released and finally here. Even though I have faced them across from me at the tabletop already, they are now formally out.

The Rumors
Getting right down into the mix, the rumors of a rapid release schedule is quite amazing. I tend to agree from everything read, that this could really come to pass, and would start in about 6 months with Necrons. The following is very likely Sisters of Battle, and could be hear before the end of the year, but I still put it first couple months of next, followed by Tau a year from now. Yea, I know the rumors put it down faster than this, but hey, they are rumors.

All this stems from Stickmonkey's nda contract of silence before a release which is about 6 months before the codex hits the shelves. The odd part is, that he was told it was time to stop talking about all three of the codex's. I can't find it in my heart to see two codexs released before the end the year, but hey, I also believe anything is possible..

If you really want to see something interesting, the release schedule that I had posted up January 1st, is looking very likely to all pan out. At least extremely close, and to my amazement, it put Sisters of Battle before the years end. http://natfka.blogspot.com/2011/01/2011-updated-release-schedule-happy-new.html

Sisters of Battle Leak
Now that April Fools Day is over, it looks more and more like that March 30th rumor leaked play test codex is real. I will do my best to get a full copy of that, but who knows, there may not be more. I will do what I can. With that, realizing that it is only a play test codex, I was excited and reread the pages I had a little closer. I would love to see a new transport for them, "the repressor", instead of chimeras. The rumors are removing the Sisters of Battle away from the Inquisitors somewhat, and giving them more of the Ecclesiarchy.

Dark Eldar Front
I keep hearing people talking about a special characters release coming next. This has me excited, as I want my new Vect model. Other than that there are some wonderful Dark Eldar characters I would like to see, but really have no speculation on which ones they would be. I definitely heard that the baron was one of them coming next.

My own models and lists are still being refined. I have had little chance to get a game in this week, but this coming week is looking great for a couple. I will definitely be getting a game in on Thursday, and possibly sometime earlier in the week.

I am very disappointed in Beastmasters at the moment. Mostly due to the fact that the large bases make them extremely hard to use as a webway unit. Coming in out of reserves in a webway in cover is hard. A bad roll and your f'd. Normally I am good with my placement, but sometimes games make you take risks depending on the situation. A bad roll of 4+'s on coming in, and your webway users are going to have a hard time because of too many models. I believe that if you are going to use webways as a means to enter the game with beastmasters, you will be almost required to use two of them as initial deployments round 1, or you will be in trouble for room.

It is not that I cannot use beastmasters to just set up with at deployment, but it is that I want to "punch" of them using a webway. It will take a game or two to see what I want to finally do with this.

Otherwise, I have spent some time modeling, and the pressure of not accomplishing much is getting to me. This kind of pressure really slows me down, and hence nothing EVER seems to get done.
4/03/2011
Natfka
Dark Eldar, Necrons, Presence of Faeit, Sisters of Battle, Tau