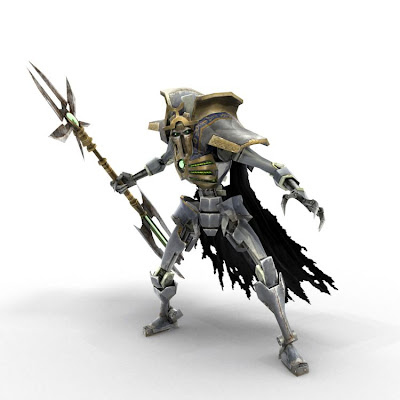 Today I had found a brief summary of necron units, and although it was brief it had some information in it that was new to me. So here I figured I would combine that with what we heard on Monday, and compile them into one single summary, with the new information typed in italics.

Of note there are two named new heavy support options, some possible names for Necrons Lords, along with some of the lords that will make other units troops. There is also some confusion on where scarab swarms will go, as the new information puts them into troops. I would not hold my breath on this one yet.


Please remember to take all rumors with a grain of salt.
Necrons
Author : Mat Ward for the bulk of the codex, but two others were involved before him.

One of the lords was like 240 points or somewhere around there. He looks like he has potential to be beastly in CC though.
(one of them is 240 pts worth, cc specialist vs 2+)

Named Lords:
The Enfleshed - making Flayed Ones Troops
The Undying - making Immortals Troops
The Silent King ?
The Voidbringer ?
The Stormcaller ?
The Harbinger of Night ?

Troops
Warriors
Will come 10 to a box
New options and also other colors of rod (orange and red I think? Orange is not bright orange, but sort of dark, kinda like a beer color almost)
Warriors - no re-cut, possible additional sprue, yellow, orange, red, green rods, possible mark system. (10 per box)

Warriors are not changing, but doesn't preclude a new weapon/option sprue.
Otherwise look the same.

Scarab Swarms (my comment, since they are also suggested at being fast attack, I wouldnt hold my breath here)

Elite
Immortals
Redone, in plastic? Unsure of the material.
Lots of "Bling"
Bigger than old ones
One of the Special Character ‘Cron lords makes them troops
Will come in boxes of 5, can be in units of up to 10.
large (35mm) base; they are redesigned as larger, bulkier and more

Flayed Ones
Redone, unsure of the material.
(Harlequins counterpart?)

Getting a remake
Will have several options and be able to fulfil a variety of roles in the army.
Spyders redone in plastic.
1 per box.

Wraith Lord feel all around
One of the guns looks similar to the new gun the destroyer guys are getting which works well against hordes.
He has a lot of weapon options
1 per box.