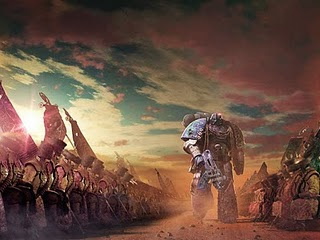 Here is an updated release schedule for what may be coming out. Most of it is very similar to what we have been seeing since the beginning of the year, so it seems likely that 3 codexs are due on the very near horizon. At the beginning of the year we had predicted the following- Necrons (Sept), Sisters of Battle (End of the Year), and Tau were then discovered to be early 2012.

The following rumors are similar with more alternative options, and the mentioning of a possible name for our summer of fliers, Wartorn Skies. Personally I like the name, and cannot wait to see it. Will I play it, who knows. I will at least look at it, and read through the rules as I normally do with 40k expansions. Its also possible it will be a White Dwarf release, and in that case, I will pick up that White Dwarf.

October : Necrons or Sisters of Battle

December : Nothing as usual

Q3-Q4 : Tau are rumoured to receive plastic Pathfinders and Vespids but without a new codex that does not really make sense.

Q1 : Depending on who got the 40k winter release we should see either Necrons, Sisters of Battle and/or Tau Q1