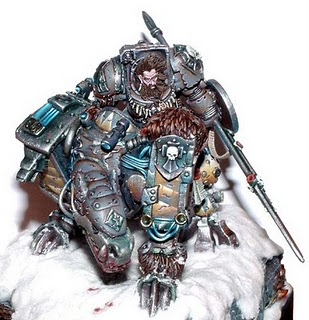 Something Spacewolf players everywhere want more than anything, Thunderwolf Cavalry. Personally I cannot wait to see them on the tabletop. Not having a model makes it difficult for a lot of people to get them, and there are a lot of people waiting to spend money on this model. I hear it all the time. So here is the rumor, please take it with a grain of salt like always.

via Ghost of War
Spoke with Forgeworld and they indicated they were denied rights to make thunderwolf cav because GW is doing them in plastic.


The guy I was speaking to said they are already done and slated to be pushed out in September to go along with the big UK GamesDay.

#2
The gent I talked to was the main guy at the FW stand at Adepticon. He said that FW wanted to do the Twolves a while ago, with the new book they are doing, but GW said no as they already wanted them in plastics and were working on them.

He said that with the release of their book and the fact that GW uses UK Gamesday as the holy grail of their release teasers... to expect them there.


He did say they were already finished and are awaiting a splash release.
4/05/2011
Natfka
Rumors, Space Wolves