Home » models » Counter Rumor to the switch from Metal to Resin

Counter Rumor to the switch from Metal to Resin 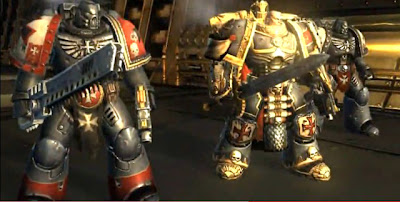 I really do not worry about what my models are going to made of. Games Workshop will make their models, and only if the quality of the model goes away, will I switch to buying other models for my armies. So until the official announcement is made, there is really nothing to be concerned about in my book.

We can always bitch later about how bad of a choice a company makes. My only comment now is, Keep up the Quality and find ways to improve it without ridiculous price increases.

I will however keep readers updated on what I find on the subject. Today's rumor batch is a long one, but gives a decent counter rumor and some good ole logic about what may or may not be happening to our GW metal models. It is long, so I apologize. Only the first part by Denzark is the rumor.


The following rumor was taken from a blackshirt, so ample salt is required. Here is the rumor, followed by some conversation. Please remember that the part from straightsilver is opinion, but is some good solid logic to follow the rumor by Denzark. I posted quite a bit of it, simply because I found it a good read.

via Denzark
there is an insurance premium against stock levels. They are trying to reduce stock levels (as per the recent company statement). When an item is on the shelf in the shop it is face RRP value, and this is what it charges to the insurance company in case of loss for whatever reason. Recently shops have apparently skirted the levels at which the loss is insured to, running huge costs for claiming over this.

Metal is more costly and prone to shoplift. However, if on the shelf in stores at GWHQ it counts as the exact cost of producing, not the RRP including shipping to the shop, costs abraded against bricks and mortar etc. Hence cheaper to insure. So your metal one off army centre-pieces people will go to Mail Order for. An all plastic shop is cheaper to insure.

No change to resin.


via Striaghtsilver
This to me makes far more sense than the rumoured change from metal to resin.

As well as insurance premiums there is also the impact of Stock Turn, which is something all retail companies are having to look very closely at in the current economic climate.

Stock Turn is the number of times a shop sells the monetary equivalent of its stock holding in a given period.

The reason this is important is that as has been mentioned if you have a lot of stock sitting on your shelves you want to make sure it sells quickly.

Shelf space comes at a premium these days, especially with the increase in rents and rates that many stores now have to pay.

It is no longer economically viable for stores to carry a full range of products if some of these aren't regular sellers. If you go into most bookstores now you will see that they no longer carry any where near as many titles as they used to, you have to order them in.

GW would be mad not to follow this trend, as it is going on everywhere right now and makes very good business sense.

It is better for them to have products which sell regularly and consistently, and to have these in quantity. It isn't viable for them to have shelf space taken up by slow sellers, like blister packs.

There is also the logistical issue of blisters. When a store orders blister packs they come in in sleeves, normally of about 12 packs per sleeve.

These are expensive to ship out, and the majority of the sleeve will no doubt sit in the store's stock room in any case.

I don't doubt that almost all metal blisters will go direct only to free up space in store. This also means that in the future if this business model works they can open much smaller, one man stores to replace their larger ones, which again has a cost benefit.

And I wouldn't be surprised if GW made all metals strictly direct only via their own website, and either not available at all at independents, or sold at a premium.

GW's retail sales are down by a significant margin right now, whereas their sales to independents are up.

It doesn't take a genius to work out that this is because most people buy their figures online from places like wayland or Darksphere because they are cheaper.

If you can't buy blisters from these type of stores and have to order direct from GW chances are you will buy your plastics from them too to save on postage.

In the long run this means that GW's margins increase which is what the shareholders are desperate for right now.


via Striaghtsilver
I must admit when stock turn and core range initiatives were first introduced I baulked at the idea of them, feeling that a full range of products would be more appealing to the customer than having to order things.

I for one would rather go into a store and buy everything in one hit rather than making several trips,and having to wait for ordered items but that isn't the case for everybody.

However the days of any store, even specialist ones being able to carry an entire range of products is sadly long gone.

It isn't so much a problem for smaller independent stores as their overheads are comparably low, but for large chain stores it really is an issue.

Having enormous amounts of cash invested in surplus stock really irks both bank mangers and shareholders alike, and has been a problem for GW for many years.

This is one of the primary reasons the bits service was scrapped.

Moving slow sellers to direct only makes perfect business sense, and almost all high street retailers do this now, GW is in fact years behind.

But then it has taken them far too long to introduce EPOS tills which give them a much more accurate stock turn analysis, and I'm sure it's for that reason that the move away from blister packs is happening.

They are literally dead weight and massively bring down both average transaction values and stock turn figures, which looks bad on a company's profit and loss.

This way they get to massively decrease their stock holding, saving them money.

It may not be that great for the customer, but it is a sound business decision and I am surprised it has taken them this long to realise it.


via Straightsilver
It would be difficult to say for GW as they are an exceptional company, producing their own product and distributing it to their own stores gives them a huge advantage over other retail outlets.

Certainly the book industry was hit hard when major chains like Borders and Waterstone's introduced their Core Range policy.

They simply refused to stock niche books, or books from small publishers as they knew they wouldn't get the same advertising coverage as books from other publishers like Harper Collins or Penguin, and this put quite a number of smaller publishers out of business.

However GW is in a position to give as much support to a product as it wishes, and to be able to produce product in whatever quantities it wishes.

The thing about metal minis is that they are very quick and easy to cast, and there isn't a minimum number you have to make at any one time like there is with plastics.

The problem with them is the amount of shelf space they take up, and their unpredictable cost due to the nature of the metals market price.

I suspect that going direct only might actually be a good thing for slow sellers, as they will pose a significantly lower risk now if they are simply cast and shipped to order.

GW would be able to offer more strategic support to certain systems too, and won't have money tied up in dead stock any more, which can prevent future projects based on previous sales.

I don't think blister packs are the impulse buy that everybody claims, and I don't see sales of metal models falling drastically as a result of this.

Let's face it, most of the models in an army will be plastic, it's generally (although admittedly not always) your HQ, Elites etc that are metal, and we will always want those.

Interestingly though to throw a spanner into my own works there was one thing I left out of my conversation with Jes Goodwin last year that I thought might be worth mentioning.

When I said it was really cool that the plastic arms fitted the Dark Eldar Archon model he said that was because the designers had been briefed when sculpting character models for that range to keep in mind converting the metal models into plastic at a later date. It didn't seem that significant at the time, but maybe now it does?

I still don't believe we will see an end to metal models though.
4/29/2011
Natfka
models