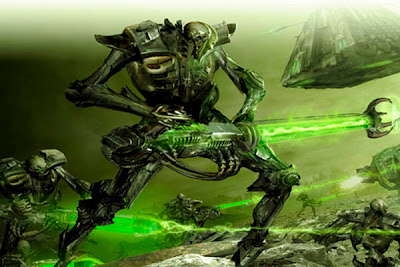 Way to start off our Monday morning with some Necron Rumors. It will be a good rumor day, as I already to go is the next set of rumors for the day, followed up with some Dark Eldar tournament lists as I prepare for this coming weekends tournament.

Necron rumors are turning into high gear and should be continueing if they are indeed the next codex.
Remember that these are rumors, and to take with dose of salt.

rumors via MadCowCrazy
Necrons
Author : Mat Ward for the bulk of the codex, but two others were involved before him.

One of the lords was like 240 points or somewhere around there. He looks like he has potential to be beastly in CC though.

Troops
Warriors
Will come 10 to a box
New options and also other colors of rod (orange and red I think? Orange is not bright orange, but sort of dark, kinda like a beer color almost)
Warriors are not changing, but doesn't preclude a new weapon/option sprue.
Otherwise look the same.

Elite
Immortals
Redone, in plastic? Unsure of the material.
Lots of "Bling"
Bigger than old ones
One of the Special Character ‘Cron lords makes them troops
Will come in boxes of 5, can be in units of up to 10.

Flayed Ones
Redone, unsure of the material.

Tomb spider
Getting a remake
Will have several options and be able to fulfil a variety of roles in the army.
Spyders redone in plastic.
1 per box.

New giant MC
Ranged or Melee options
Wraith Lord feel all around
One of the guns looks similar to the new gun the destroyer guys are getting which works well against hordes.
He has a lot of weapon options
1 per box.