On the Tau Front (more rumors) 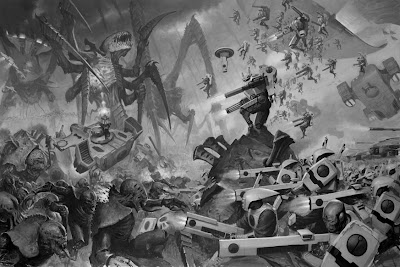 Yet another set of Tau rumors. The first two come from novels, possibly indicating possibly some new units amongst the Kroot. While Novels I am sure have a certain liberty, its worthwhile to take a look. The rest is a full set of rumors without much detail. Here's to the Tau, and please take with salt.

by Vash 113
I don't know how many of you guys may have noticed already but in Savage Scars the White Scars Sergeant Sarik duels with a psyker Kroot Shaper in service to the Tau. At first I brushed this off as a minor reference however, in the Victories of the Space Marines Anthology the short story detailing the Silver Skulls has them encounter a planet infested with Kroot who ingested the DNA of Eldar and have manifested potent Psychic abilities.

This is now two references in a short span of time to something previously relatively unheard of in 40k fluff. This makes me seriously wonder whether we will see the Tau gain access to Kroot Psykers in their next Codex, this could potentially shift the metagame significantly, granting psychic capability to one of the two races currently completely devoid of psykers.


via Corporeal
1) Kroot HQ is in the works!

4) Kroot shaper will allow for the unit to have a special genetic trait.

7) Vespids to get a Heavy unit

9) Crisis suits will get “hit and run” ability

15) New type of “Heavy” battlesuit (new prototype of the broadside)

17) Pathfinders will be changed to act as a type of Tau Commando infantry
4/07/2011
Natfka
Rumors, Tau