Home » Dark Eldar » Rumors » The Dark Eldar descend from the Skies in a raid on Realspace!

The Dark Eldar descend from the Skies in a raid on Realspace! 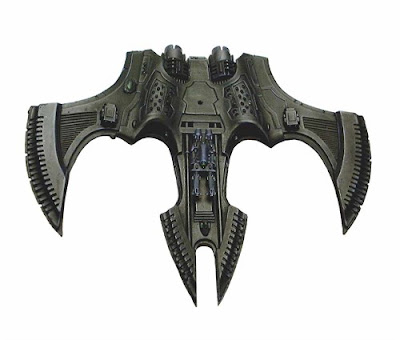 Artwork showing the next Dark Eldar release has been seen, and it was possibly a Voidraven. This has me all fired up. In reality I want the Razorwing Jetfighter, but I want to see both. No more teasing, here is the rumor. Please take with the usual salt. (please note the above pic is the void dragon phoenix from forgeworld, not a leak)

Via Decapitator
Finally, and to me the best and most interesting part of the fleeting glimpse I got of the latest issue, was when I turned to the inside of the back page (which I will admit was the first thing I did! ) The artwork is of either a Razorwing Jetfighter or a Voidraven Bomber, however it looks more like the Voidraven in my opinion. And the text reads "Next Month - Wartorn Skies! The Dark Eldar descend from the Skies in a raid on Realspace!" Im pretty sure there words were to that effect, if not then they are pretty close.

The 'Next Month' part confirming Wartorn Skies is very interesting, whether it's referring to the possible Summer of Flyers expansion and confirming the name, or whether it's just a teaser for the upcoming DE releases on the 10th and the 24th June is anyones guess. Although I would be surprised if they advertised Summer of Flyers with just DE artwork and a DE release, even if it is a Flyer. However I guess it does confirm 1 thing, the upcoming DE waves will contain either a Voidraven or a Razorwing, possibly both! Stranger things have happened!
4/23/2011
Natfka
Dark Eldar, Rumors