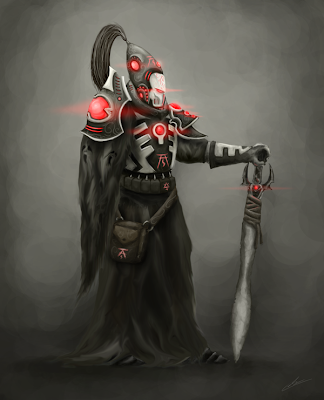 Another rather slow week on the 40k front. Warhammer 40k is an amazing thing, It is a global game, and in a single week there is often enough news, rumors, battle reports etc to keep a blog like this going, even when its slow. I have this fear that I won't have anything for the next few days, and yet to my surprise something always comes up.

Dark Eldar
The Dark Eldar earlier this week received rumors of a decent Battleforce, and that the Grotesques, Wracks, and Haemonculi are done. The rumors of switching to resin are still strong, and personally I believe this switch is coming. However it really does seem that perhaps the Dark Eldar wave of metals might already either be done, or at least now ready to be packaged up and released. This would mean those of us that walk the dark side of Eldar might be looking at the last of the metal models from GW.

For Grotesque models, I have decided to wait at least up through May to decide exactly what I want to do with them. They are really the one model that I have to really see how big this thing is. I've been told before, that just make them about as big as an obliterator or terminator and I'm fine, but I want to see actual size. Towering and Monstrous are the first two lines of description in the codex.

Regardless, I have a lot to do. This includes getting my butt down to the local store and getting some paints. I haven't done much 40k wise this week, and I'm getting antsy.

The Truth About Rumors
This one is starting to bug me more than a little. I have noticed more than once this week, rumors have been taken out of context and posted elsewhere from here. I do not mind rumors floating out from here to where-ever, but at least lets not change the entire rumor.

I read a couple days ago that Forgeworld was re-doing the chimera. Then I was further amazed that the link brought me back to my site. WTF. The post (which was very obvious) was about Inquisitorial Chimera Doors being re-worked. How do we get a new Chimera out of that? Normally I would dismiss it, but then people immediately look at this site as putting out crap. At least if someone is going to think of this place as crap, do it with the correct information.

The other mis-informed was talking about (on a very low ranked forum in my books but none-the-less) that the authors on Faeit 212 were spewing out tons of wrong information about what was coming out. I generally do not get caught up in this stuff, but hey, this is my editorial this morning and this is my response "Rumors are Rumors". If the post is not a rumor, it is labelled announcement.

When I post a rumor, it says rumor, and like always, apply salt. This means it may not be true. I do my best to sort through all the rumors that get posted. I stay away from rants (like this one, lol) and wishlists. In fact I spend too much time trying to find the best ones with the most credibility. I think a lot of people that come here for the rumors do so, because I tend to get to them rather quickly, and I do a decent job of filtering through them. Tired of talking out my butt, next subject.

War-Torn Skies
You can call it what you will. Murderous Skies, Summer of Fliers, whatever. Either our big announcement at the end of this months White Dwarf was about this upcoming (White Dwarf) release, or it was about new Dark Eldar models. Personally, I think it is about both. The rumored War-Torn Skies often was saying it would be a White Dwarf only release, and that Dark Eldar flyers would be released about the same time.

So I still expect a 40k expansion on May 28th in the White Dwarf. Along side it, I expect to see the Razorwing Jetfighter, Venom, and Scourges. While the models may be split into two releases in June, I am hoping to see the rest of the Dark Eldar models later in the month. We have a good idea the Talos/ Cronos kit will be here. I am hoping they complete the Dark Eldar monster set with Wracks, Grotesques, and the Haemonculi in the second part of June.

See what I did.... Flyers, skimmers, and jump pack troops alongside a 40k flyer expansion, and then a monstrous Dark Eldar release with Haemonculi and their creations. Now what a marketing genius am I. Just to be clear though, this is conjecture. Not a rumor, not news. OK, I'm done.