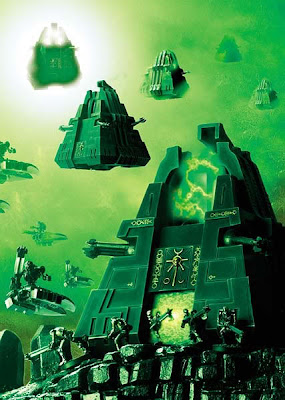 I am going to be the first to shed some serious doubt on these rumors and normally I would pass on this one. However, there are a couple interesting things listed in here, so I thought I would throw down this morning.

Just a side note though, several rumor mongers are jumping on the bandwagon of a August/ September release for this codex, including saying they have seen the playtest codex. from posts by Harry, ghost21 and Bramgaunt.

Please take tons of salt here, and if you are able to decipher some of the vague parts of these rumors, please comment on.

Gauss. Same rules but counts as AP1 on a 6 - only on vehicle.

Phase out: will now be once a unit is reduced to 25% of its initital numbers, it phases out

Flayed are troops, 2a, reduce ld to 5! also DS into cover

many weapons have Nec at the start, guess who wrote the dex.

1 New vehicles, Pylon. Pylon is a AV12 turrnet which can pile plate or move 'Necrons' next to it

Destroyers now pick as a group to fire S6AP4H3 or S9AP2H1

Tomb spiders have 4 variants, 40pt base. 1variant is basically a tervi but only produces base scarabs