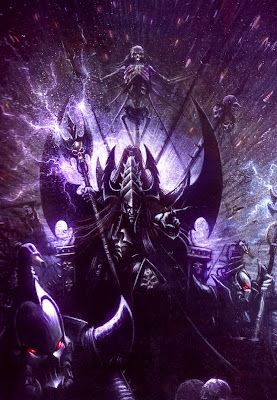 This week started with a Bang. Had games scheduled, new exciting rumors or Tau and Sisters models, then it died. It didn't really die, we had tons of new Fantasy releases and information out there. The Tomb Kings new release was all over, and showed off some very cool models. Wait a minute, this is a 40k blog. So yes, everything died towards the end of the week, as did my motivation.
Presence of Faeit is a weekly editorial by myself. I generally report during the week what is going on, and today is my day to comment on what exactly it is that I am thinking of.


Leaked Sisters of Battle Pages
OK, this one has been on the edge of my mind now for some time. We had a supposed leak/April fools joke at the end of March with the leaked copies of a playtest codex for the sisters of battle. It was only 4 pages, but hey, we take what we get. This last week someone posted a copy of what they posted, and claimed to be the author of the leaked pages. The page he posted is below.

people are still posting stuff I wrote as an April fool three days later and thinking it could be real, despite me fucking up a load of details because I was rushing it.

...and just in case anyone doubts that I really did fake it, here's a screenshot of a page before I messed around with it in photoshop to look like a scan.
I am not going to post his name and here is why. I believe that this image is a fake and it was done to garner attention. Primarily because of two things, I believe that the poster of the above image was making things up.
1. the "Leaked Pages" are not the same (the page leaked was Battle Sisters Squad and Adeptus Arbites Patrol, not Adeptus Arbites Patrol and Redemptionist Militia).
2. And he was in a hurry, yet some how found the time to create different pages. If he was the author he would of posted the same pages that we saw as a leak.
3. Other rumors are coming out, giving us very similar options and the same Repressor transport vehicle.
Are the 4 pages leaked real? I don't know. I give them a small percentage chance of being real, about the same I gave the Grey Knight playtest codex leak. I just do not think the above guy is the real author of the leaked pages. I read a lot of these things daily, and his claim doesn't sit right with me.
Sisters of Battle Models
Back to Sisters of Battle. The Repressor is a very exciting addition for me. Now that we have heard of it from several places, and after doing some research on them over at forgeworld, I do believe we will be seeing these in the upcoming codex. They are very cool vehicles, and it is always nice to see new vehicle additions to the game. The repressor is definitely one I am looking forward to seeing on the tabletop.
Tau and Why I don't feel it;
There was yet another rumor floating around, that the Demuirg are a definitely included in the new Tau codex. This is exciting, and yet another confirmation for them. No need to really post the rumor, since it says just that. "Demuirg are definitely in the Tau codex".  We also had rumors that gave us some new options for Tau, alongside Crisis suits getting three wounds.
Why am I not excited for Tau?.... I want them to be different, and feel different on the tabletop. I do not even consider Tau when making a list. There is no, Tau list that I care about. Yes there are some good tau lists, but they do not vary the game enough to be considered on their own. They play too similar to other army types. Tau need their identity. Right now I don't feel it.
Scourges vs Reavers
This topic is probably one I should do a piece on. I have read other sites do theirs, which is why I have avoided doing one, and yet I am falling right into the same dilemma. Scourges vs Reavers.
I have been using scourges, and they have been extremely effective on the tabletop. I have tried out blasters, Haywire Blasters, and Splinter Cannons, and finally have fallen in love with their Heat Lances. (the other options work well btw, but if you are using webways, I suggest heat lances).
Reavers I have also used, and had less success. I can't get them out of my lists though, and it looks like for my next series of games, my scourges are being replaced by Reavers.
Reasons:
Scourges in 5 man heat lance units set to deepstrike with portal options work very well. However, once you start looking at 10 man scourge units, the deepstriking becomes much harder with so many models, and the reavers set to reserve are giving so many more options of where to come on the tabletop (table edge, or webway). Also as you read further down, Difficult Terrain is not your friend. Since I am moving to larger units of Scourges/ Reavers, reavers seem to be the superior choice with more flexibility and threat range. I supposed this coming weeks games will decide?
Game of the Week
My second game this week was Dark Eldar vs Chaos Demons. I was like oh crap, never really considered how to fight demons with my lists. First things first, it was a standard deployment and Kill Points with me stuck going first. Things looked good for him before the battle started, however, things quickly turned against him, as the Dark Eldar went to work.
Vect killed too many things to really count and ended up with an amazing 8 pain tokens at games end. He personally killed two Daemon Princes, many Plague Bearers, 4 Blood Crushers, and a bunch of nurglings. Vect was on fire, and nothing in the chaos daemon army could touch him. After 4 rounds of battle, the daemons were tabled, and Vect had only had to make one invulnerable save.
Vect probably won MVP as he faced the climatic final combat of 8 charging Blood Crushers led by SkullTaker on Juggernaut.
Of note, I lost 6 scourges to difficult terrain checks. Disappointing. Moving to reavers. I had in fact caused myself more casualties (6) than had my opponent. Regardless, Reavers are back in the lists.
4/10/2011
Natfka
Dark Eldar, Presence of Faeit, Rumors, Sisters of Battle, Tau