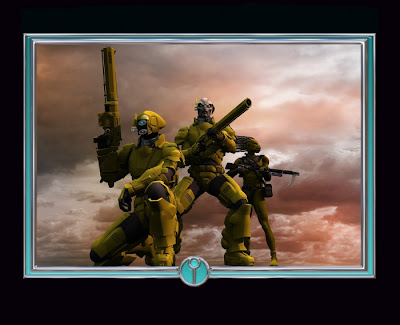 One of the bad things already this week, is how far behind on the rumors I am. I literally had to choose between 5 different choices this morning. So I started with the most reliable of the sources and authors. So the First will be a small one on Tau crisis suits and HQ's. There is a lot to do, with little time, so here it is. These are rumors, so again do not forget the salt.

via Stinger989
Some new info about the upcomming tau, again this is just rumors so take as you will.

HQ choices are used to unlock units for troops, so a commander in a crisis suit unlocks crisis suits as troops, an etheral unlocks fire warriors, shaper unlocks kroot, demiurg commander for demiurg as troops.

crisis suits-
mostly same stats but now 3 wounds
come with every gun option and you can choose what weapon systems you fire every round. cost (land speeder + extra HB) per model, squad size max 5

broadsides-
can take network markerlights instead of the missiles on their arms
more later.

Via Ghosts of War
I can vouche for Stinger as we were at Adepticon this weekend together.

Also a few things it looks like he missed.

Also...
Drones are no longer bought as wargear. They are bought as a unit and then divided as you see fit that the start of the match. You can mix your drones when bought for the point cost needed. This addresses the Drone Squadrens etc as an option.

So you could see who your playing and decided if your shield drones are needed more on the crisis or the broadsides.

One markerlight can fire the seekers off one model. Seekers replentish and are no longer one use items. = Skyrays will be the new WIN (only able to fire one model a round.. so no chain firing tons of missiles off a skyray)

He is right, nothing is troops until you unlock it with a HQ or character.

I was a bit stunned to hear the above, and if it wasnt from the same source as the Grey Knight rumors that Stinger had.. I would have called BS. But I would bank on it.

Tau = the death of MECH

More..........via Stinger 989
Lol thanks gow I was gonna slowly release more but that works too. Another small part added to the shield generator is it makes the model eternal warrior until he fails his save so ignores the first instant kill. Only the team leader can take it though

Yes skyrays will be the new god tank as missiles always hit side armor so mech will be a very hard army to fight with against tau.