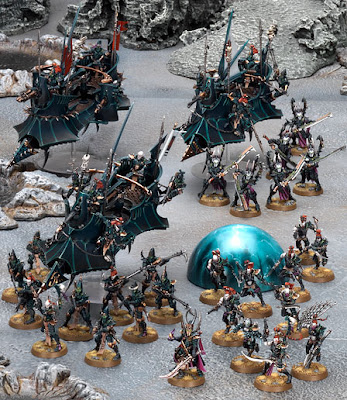 The phsyical dates really do not matter to me as much, I want certain models released, and it looks like I may be waiting a while since they were supposed to be metal. Either way, any information on what is coming and when is still decent information.

The rumor below gives two dates, basically mid-month and end of month for June Releases. I do not know how they will be splitting this up, but with only three items to release (scourges, talos/cronos, and razorwing) Why would they would split the release up into two seperate dates. Perhaps more models than what we know of?

Here are the rumors, please take with some salt, just as you would with any rumors.

via The Decapitator
As many of you are aware there will be at least 2 more Dark Eldar release waves, maybe more. We've got a rough idea what they will contain, Plastic Talos/Chronos kit, Plastic Scourges and maybe even a Razorwing and Voidraven Bomber.

Having seen the upcoming release schedule in GW, they have 2 more waves written in for the 10th June and the 24th June 2011. Not 100% sure whether this will be the day the releases are announced, or the models actually released, meaning we could then expect an Incoming article towards the end of May.

So as it stands and barring any changes, we shall see a few more Dark Eldar releases in June!
4/15/2011
Natfka
Dark Eldar, Rumors