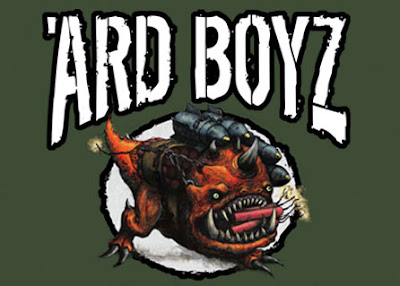 I really had thought I had checked through these pages about 3-4 weeks ago and found no updates for this year. Apparently they had updated it on Feb. 21st. Regardless, the dates are in, and really most people already know of several places to play at this year. Last year I took my Guard, with this years goal of taking my Dark Eldar.
I hear so much internet talk of how non-competitive they are, so I am really looking forward to wrapping up my army lists. I will work on several, and see what comes out on top. I am glad to see this announcment, as it also pushes me to get my army done. Yea I know I do not need painted models, but I like to get them done, and painted before something like this.

Here we are, at the onset of the 2011 40K 'Ard Boyz Season and the question still stands, "Who is the best 40K player in North America?" Thousands of people raised their hand last year, thinking they had the marbles, but only a few remained standing after the dust settled.

Think you can take the prize? Once again, you'll have to PROVE IT!

'Ard Boyz Tournaments are a three-part, competitive series of events hosted by Independant Retailers across North America. Unlike the traditional tournament format you may be familiar with that takes into consideration your painting and sportsmanship, the 'Ard Boyz Tournaments focus on one thing and one thing only - how well you play the game! These tournaments are the place to field that nasty list you felt guilty about playing, or that massive horde army you couldn't hope to paint it in time.

Fight your way through the locals in the Preliminaries on August 6th. This round will be held at Independent Retailers all over the country.

Players who end up in the top three will be invited to the Semifinals held in select locations on September 17th. The winner of the Semifinal will get a 2,500 point army of the race of their choice and the 2nd and 3rd place winners will receive generous online vouchers for our Web Store. These top three Semifinalists will be eligible to attend the Finals, which will be held on October 22nd.

At the main event, players will compete for buckets of prizes, but more importantly, they will fight for the right to call themselves 'Ard Boys. So who will be the best this year? Are you pansies going to let a bunch of Warp-spawned filth take the title again or do you think you can wade through the Nob Bikers, Lash Princes, Thunderhammer Terminators and Carnifexes to claim victory?

The final three places from each FINALS location will qualify for the 2012 Throne of Skulls Grand Tournament.