Chapter Approved 2017 Coming in December.... Whats in It.

Chapter Approved 2017 is coming in December according this set. Rules for Adeptus Sororitas and Space Wolves which should lead us to believe that there are no codex updates coming for them soon. You can also see that certain codices are not listed here.... like Dark Angels, Blood Angels, and Chaos Daemons which are now known to be the next 3 codices.


As always with things like this, always use a grain of salt until we get some official information. I'm certain we will start seeing more very very soon. The image above is just from a previous Warhammer Community article, where they gave us some insight into what is coming. You can see that here.
http://natfka.blogspot.com/2017/08/new-matched-play-rules-coming-in-next.html 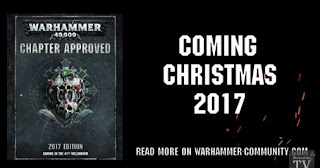 
Adepta Sororitas
Strategems
1GP Martydom-use when a character dies and on a 2+ can perform an Act of Faith
1GP Purity of Faith- use when an enemy uses psychic powers within 24" on a 4+ negate it.

Space Wolves
1 GP shooting phase choose 1 unit within 1" of the enemy and use bolt weapons as if they are pistol 2 type.
1 GP set up a unit on the hunt- deploys at the end of any movement phase within 6" of any board edge and more than 9" away from enemy models.