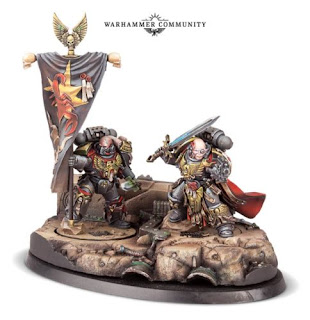 via Forgeworld and the Warhammer Community
https://www.warhammer-community.com/2017/11/20/new-heroes-warhammer-40000-coming-soon/


Forge World has allowed for many heroes, new and old, to make their mark on the tabletop. Fans of Dawn of War can now add Gabriel Angelos to their armies, while Badab War champions like Tyberos, the Red Wake and Asterion Moloc have become fan favourites.

Perhaps the most well-known Forge World Space Marine Chapter is the Red Scorpions, zealots obsessed with purity and infamous for their ruthlessly effective battlefield tactics; the skills of their leaders in close combat are feared across the galaxy. Very soon, you’ll be able to add two such leaders to your Red Scorpions army, joining Magister Sevrin Loth and the newly reinvented Carab Culln, courtesy of the Warhammer 40,000 Character Series. 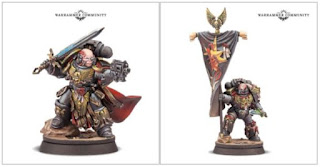 Casan Sabius and Sirae Karagon are the Regents of the Ordon Rift, and with the brief death of Carab Culln, de-facto masters of the Red Scorpions. Presented together on a display base, these two champions are the ideal commanders for your Red Scorpions army and feature some powerful rules, too – you’ll be able to download these for free once they’re released!