New Easy to Build Kits... with a Plague Hauler 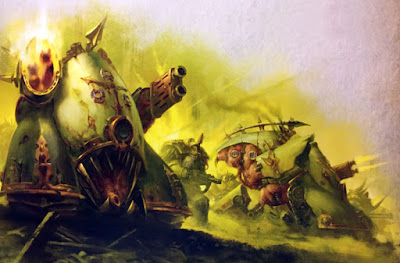 It looks like we are about to see another Death Guard release to cover some models. Easy to Build kits incoming.


Remember that this is still a rumor at this point... Hopefully we will see some more information very soon.

At my local GW today and they received a next steps panflet for people who have just bought Dark Imperium. It had the usual such as Mortarion and Primaris characters, but it also had some new Easy To Build kits, consisting of the following

The pics were only of the box artwork so couldn't see the exact content or models and there were no prices, but the Lord Felthid box was of a Lord in Cataphract armour with a Manreaper, and three Plague Marines around him. Being a smarty pants I didn't get a pic, and there was no details of when they will be released, but at least the Blight Hauler is on the way!


Hmmm... a named Death Guard HQ? My interest is piqued. Does he come with a ranged weapon (please say yes)? Really excited for the Haulers.

I genuinely couldn't say...he was pointing with one hand and holding a manreaper with the other, and that was artwork. I'd hazard a guess that he'd be a Lord of Contagion with the scythe option though