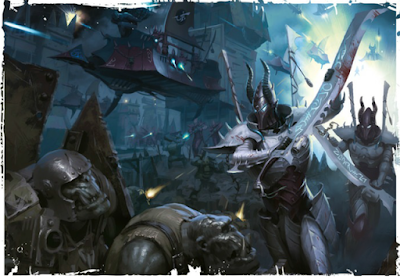 With the new Chapter Approved coming, there are lots of things you will need for almost every army in this book. Its a must by, especially since point costs are all being updated, even for Forgeworld books. Here is the latest set of strategems and warlord traits for several of the armies affected in the new book.


Please take these with a grain of salt, until we get some solid information from the Warhammer Community. These are rumors.

Deathwatch
Warlord Trait- re-roll failed wound rolls
Relic- once per game at end of movement, teleport a friendly infantry or biker unit to within 6" and outside of 9" of enemy model
Stratagems
1. 1CP select an enemy vehicle within 1" of a watch master and on a 2+ vehicle suffers d3 mortal wounds
2. 1CP each time you make a hit roll a 6+ in the fight phase and its not an imperium or chaos aligned model, make an extra attack. additional attacks cant be created from these.

Drukari
Warlord Traits
1. Wych Cult- each roll of a 6+ in the fight phase causes 3 hits
2. Haemonculus Coven- heal d3 wounds at the start of each turn
3. re-roll to hits and to wound rolls of a 1 during the fight phase.
Relic- Pistol 2 R12 S1 AP-2 D2 wounds on a 2+ vehicles on a 6+. For each model killed bearer gains a wound
Strategem
1CP/3CP one infantry, beast, or biker unit or 2 for 3 CP may use teh webway and emerge onto the battle at the end of any of your movement phases. Setting up anywhere that is 9" or more from enemy units. Can only be used once per battle.

Harlequins
Warlord Trait- re-roll hit rolls of a 1
Relic- Increase leadership by 1, and all enemy units within 6" reduce their leadership by 1
Stratagems
1. 1CP/3CP one infantry, beast, or biker unit or 2 for 3 CP may use teh webway and emerge onto the battle at the end of any of your movement phases. Setting up anywhere that is 9" or more from enemy units. Can only be used once per battle.
2. 1CP after a harlequin unit has advanced, it gains a 3+ invul until start of next turn.

Genestealer Cults
Warlord Trait- friendly infantry units can do a Heroic Intervention within 6"
Relic- +1 strength to friendly infantry unit within 6"
Stratagems
1. 1CP end of movement phase, remove a infantry unit from the board that is more than 6" from enemy models. At the end of the next movement phase, return it to the board using Cult Ambush
2.  1CP before rolling on cult ambush table, roll 2 dice instead of 1 and choose the result. A Primus may roll 3 dice instead.

Imperial Knights
Warlord Trait- add one to Attacks
Relic- replace reaper chainsword with this Melee S+6 AP3 D6
Stratagem
1CP when a Questor Imperialis or Mechanicus unit with a invul save is targeted, you may add 1 to the invul save until the end of the phase.

Thousand Sons
Warlord Trait- re-roll deny witch tests
Relic- rolling doubles for psychic tests means the opponent may not resist with deny the witch or negate it by any means.
Psychic Power- warp charge of 7. Select an enemy unit within 18" and roll 9 dice. The unit suffers mortal wounds on each roll of a 6
Stratagems
1CP If within 6" of at least 2 other friendly TS psykers, you can add 2 to your psychic test.