Necromunda Talk from the Interview with Andy Hoare 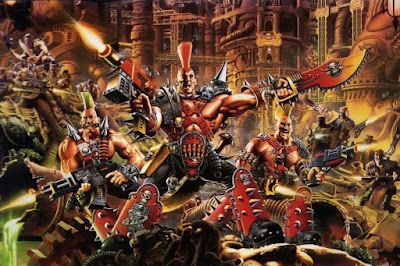 There was a great interview for Necromunda that was captured very well by Bob over on the War of Sigmar. Here is a link and some of what was said. Its well worth heading over there and checking it out. I really like what they are doing with Necromunda.


via Bob over on the War of Sigmar
https://war-of-sigmar.herokuapp.com/bloggings/2547

LEGACY RULES:
PDF on the web site, live on the game release date, for orlock, van sar, etc.. but only for the weapons the original metal models got. So don’t get too hyped.

Future
Orlocks are next year.
One plastic team every quarter +possible few wd, pdf article.
Brand new gangs are hyped.
John blanche made a book a of 80pages of fluff but the book went missing. And then new archivist of GW TIM found this book for andy. SO LOT OF inspiration.
Box set available in: eng, fren, german.
They have stock of the box - don't be scared, you should get your box if you pre-order.

Rules:
Total rewrite of the rules for underhive. Gang war 3D, is built on the underhive rule set.
It’s a "I go, you go": “interleave turn” system. So you can active more than 1 models (no details on how).

Gang tactics:
All scenario use them in a different way : choose, drawn at random, weak side can draw more or choose. There is a lot of granularity with these.

Dice:
Fire power dice : Each time you roll to hit, you roll 1+ fire power dice (depending on the weapon). Work as a sustained fire dice and ammo dice.

Red tiles: The box is a necromunda loading dock. It’s a training room at start and will be used for multiplayers 3+ (pit fight style) or future scenario.


Lvl up:
Gangs are more than the 15 players you used to have in necromunda classic.
Now you can select a crew before each scenario.
Specialist, juvie and champion get skills, gangers can’t but can be promoted to champ or specialist.
Rules for juvie will be in gangs war book, with a lot of importance. If the juvie survive a few games it became the star of the gang(no more details but lot of hype around the juvie.)

WW preparing a map of underspire in 3D.

Gang war games use a 4by4 size table.

Support class: doc, ratling cook, ….(4 planned)
FW upgrade are already on the way to new weapons, iconic item …
House weapons blitzer will be made with rules to them !
They want to make rules for everything possible to allow kitbashing a goliath with a driller !
Champions are the new heavy !

Genestealer and Chaos Cults will get rules down the line. Maybe quite early via online or WD!!
All the Genestealer Cult weapons are usable by all other gangs too, so have fun kit-bashing stuff!