The Warhammer Community just released a preview of the Blood Angels codex including a look at Stratagems, Warlord Traits, and Relics.


The Blood Angels are among the most distinct of the Space Marine Chapters, and their new codex reflects this with a vast suite of new rules, units, Stratagems and more designed to reflect the fast-paced, aggressive style of war favoured by the sons of Sanguinius. 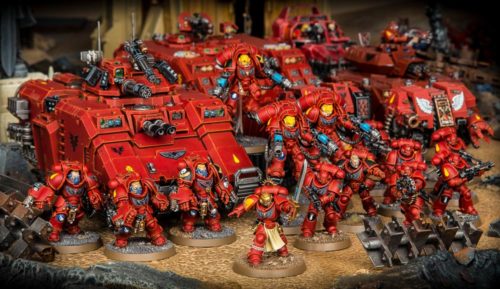 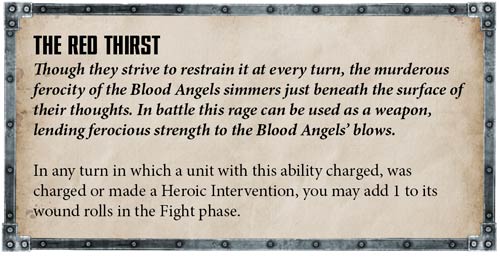 The Red Thirst gives all Blood Angels units +1 to wound when they charge, are charged or make a Heroic Intervention. With the new wound roll chart, this makes getting 2+ to wound that much easier, as well as helping your smaller units damage even your enemies’ toughest monsters and vehicles with ease. Just imagine a unit of Reivers dropping in with this! All Blood Angels successors use the Red Thirst and other Blood Angels rules too – as if Gabriel Seth needed to get even deadlier…
The Blood Angels codex is also absolutely packed with new units. As you’d expect, Blood Angels now have access to the entire Primaris Space Marines arsenal, but what you might not know is that this codex also broadens the Blood Angels range of traditional Space Marines weapons and units.
You’ll now be able to escort your flyers into battle alongside the Stormhawk Interceptor, transport scouts into the heart of battle aboard Land Speeder Storms, or unleash the might of ancient technologies from the Horus Heresy, like the Contemptor Dreadnought as well as Cataphractii and Tartaros pattern Terminators.
As you’d expect, there are loads of Stratagems to use with your Blood Angels army. These have been designed to open up new and thematic ways to structure and use your army. Death Visions of Sanguinius, for instance, lets you give one Captain, Lieutenant or Chaplain the dubious blessings of the Black Rage: 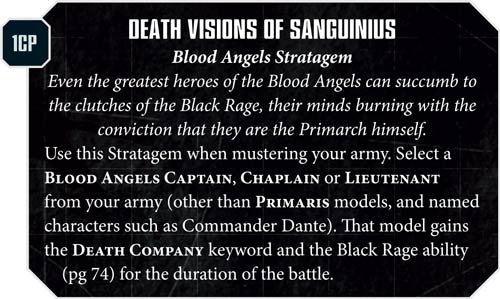 Strike of the Archangels is great for gunning down squads of massed infantry, and is especially deadly if you make the charge on the turn you arrive.

Upon Wings of Fire is a great way to grab an objective at the last minute, pull an at-risk squad out of combat or get a particularly deadly unit into position for a devastating charge. 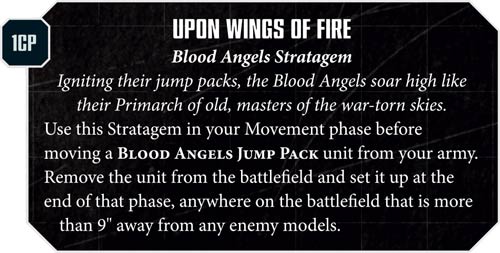 There are new psychic powers, too. You may remember Wings of Sanguinius from the previous edition. This power is back and just as dangerous as it was before when used with the Librarian Dreadnought. 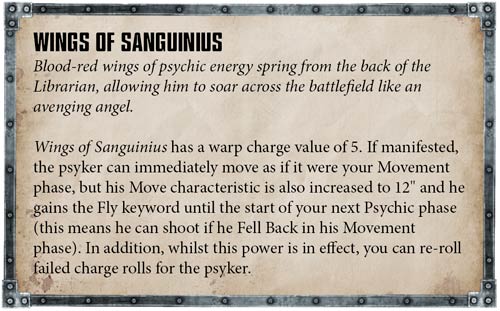 Indeed, Librarian Dreadnoughts, and the rest of your characters, are now eligible for many powerful Warlord Traits and Relics. Artisan of War is a superb way to build deadly characters, and combined with a Primaris Captain can give you an auto bolt rifle that does 3 damage a shot! Gift of Foresight, on the other hand, provides some extra durability: 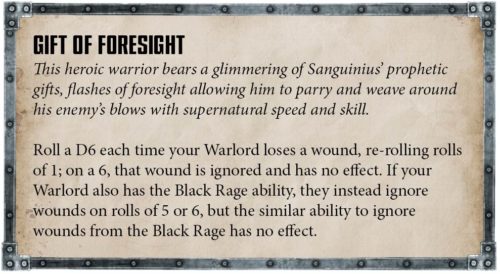 For Relics, you’ll be able to choose between lethal, master-crafted weapons of the Chapter and more tactical options. We love the Veritas Vitae, providing you with a great way to maximise your Command Points, while the Standard of Sacrifice combined with the Sanguinary Ancient to create a fantastic lynchpin for the rest of your forces. 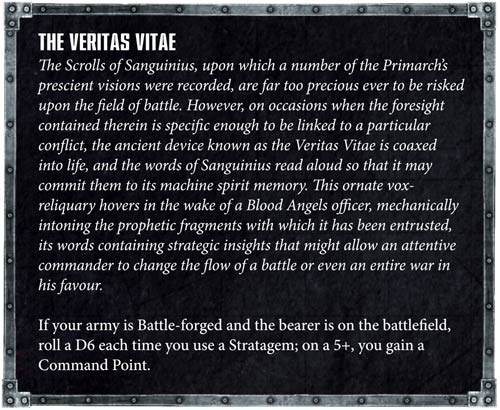 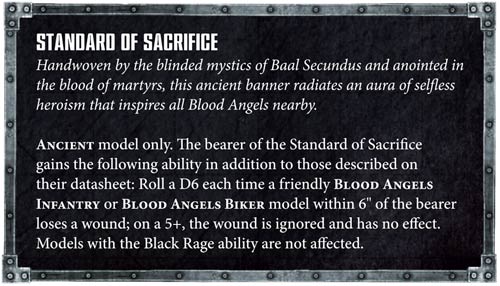 Whether you’re a longtime fan of the Blood Angels or you’re looking for a new army, the new codex has something for you. You’ll be able to pre-order your copy this Saturday.