Raging Heroes has Some Great Deals: But they End Tomorrow. 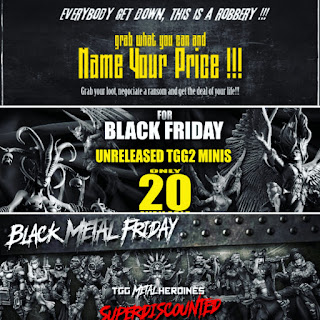 Raging Heroes has Some Great Deals: But they End Tomorrow. The Name Your Price promotion is especially interesting.


Yes, all good things must come to and end: the great Black Friday special deals are ending tomorrow Thursday November 30th, so it's now or never! Here's a little reminder of what's available:


1 - Name-Your-Price Deal:
Raging Heroes' treasure vaults have been broken into! Raid the webshop and get the deal of your life! But hurry up, enforcers are closing in and this won't last. So put everything you can in your cart, then make an offer to the negotiators and see what deal you can get!


2 - Superdiscounted Metal Heroines Packs - Save 42%:
Eight packs featuring TGG heroines exclusively in metal, that's the Black Metal Friday packs for all of you metal maniacs! Perfect to get your favorite badass elite snipers and other sergeants with a great 42% saving, in white metal.

3 - Exclusive Packs feat. unreleased models:
These packs are great discounted boxes feat. exclusive unreleased miniatures that won't be back before 2018. But there were only 20 of each available so some of them are already sold out, and very few left so hurry up!

Head to this link to get on the deals: http://bit.ly/DofWeek