New Magic Unveiled in Leaked Images for the End Times 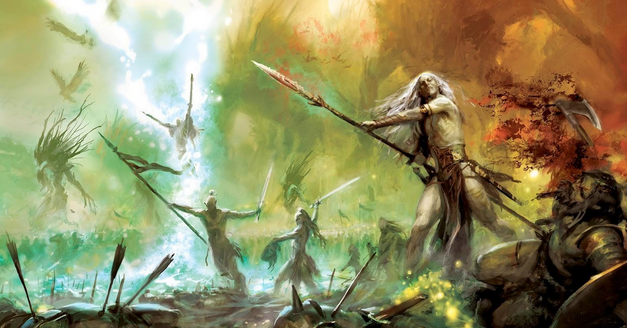 This morning a leaked image of new magic for the Endtimes is going around with details of new Lores. While they are very hard to read, you can see 5 new Lores under a heading of End Times Spells.


The image appears to have been posted by Tozudos a Dieces

you can see it also at
http://eltallerdeyila.blogspot.com.es/2014/11/magia-en-end-times.html

via the Workshop Yila (translated by google)
Lore of Life: Storm of the Renaissance. 15+. Vortex. Any flown unit gains 2d6 + 1H.
Lore of Beasts: Murder of Crows. 15+. Vortex. Any flown model suffers an impact of F3.
Lore of Fire: Debilitating heat. 20+. Damn. All battlefield units roll a dice and discard the highest over loading, chase or flee. They also have the special rule Flammable.
Lore of Light: Lighting. 20+. Curse on the enemy and empowerment for friend. As a curse, all units of the Forces of Destruction to throw 4D6 12um check in L. For every point they fail, they suffer a wound without TSA. As empowerment, all units of the security forces to gain 12um Unbreakable special rule.
Lore of Metal: Meteoric Breastplate. 15+. Empowerment. Select a friend to 24UM or less drive. Make a save of 2+.
11/20/2014
Natfka
Leaked Images , News Headlines , The End Times , Warhammer Fantasy