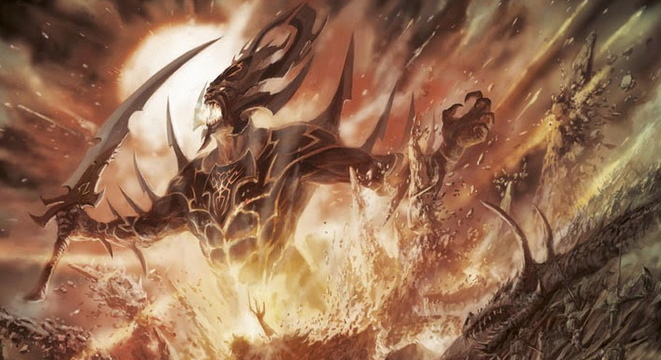 The Curse of Khaine by Gav Thorpe was just released, and the information coming out of the book is filtering in. This book that will change the elves forever.

Please do not read this if you do not want to read spoilers for the novel.

via the Black Library
THE STORY
The End Times are coming. With Naggaroth besieged by the hordes of Chaos, the Witch King Malekith makes the decision to abandon the Land of Chill and make one final attempt to seize the throne of Ulthuan. As the druchii march upon the soil of their ancestral home once again, long-laid plans come to fruition and treachery blooms, bringing Malekith closer than ever to his goal. All that stands in the Witch King’s way is the Regent of Ulthuan, Prince Tyrion, and the darkness within Malekith’s own soul, the call of the Curse of Khaine.

OK, one final Alert, Spoilers below

via a reader on Faeit 212
Hey Natfka,
Just finished reading the Curse of Khaine and HOLY CRAP! It has a bigger impact on the WFB background than Nagash and Glottkin combined.

Spoilers…
·         Dark elves have permanently abandoned Naggaroth to Chaos
·         Malekith is the true phoenix king and was meant to be the chosen of Asurayn all along
·         Teclis has destroyed  the Vortex and the remaining 7 winds of magic (Nagash has taken Death) are now embodied in various heroes in "many races". Malekith embodies Shadow and his wife, the Everqueen, life
·         As a result of its destruction Ulthuan is gone, sunken below the waves with some of the elves escaping via the world root.
·         Tyrion is dead as is Korhil, Malus and half a dozen other named characters including Orion. Morathi's fate is unclear though she fought in the final battle on the isle of the dead and did not remain in Naggaroth
·         Caradryan speaks!
·         Athel Loren is the only Elven kingdom left and the 3 types of elves have returned to a single race