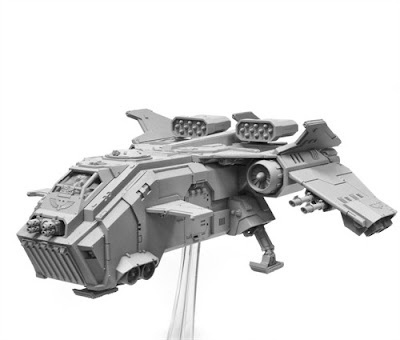 Both of these amazing models are now up for pre-orders at Forgeworld. The fact that both of these are available for chaos is just too much fun. The Decimator now has options not even listed in its experimental rules, the heavy conversion beamer, and the Storm Eagle, well its just everything we with the Storm Raven was.


Storm Eagle via Forgeworld
The legendary mobility of the Adeptus Astartes has won planet-spanning conflicts with a single strike; providing the precise application of deadly force at the point where it proved most decisive. A Chapter’s fleet of attack craft is the keystone that makes this possible, and it is the iconic Thunderhawks and Drop Pods that are at the forefront. Craft such as the Storm Eagle Assault Gunship follow close behind to lend their weapons to the devastating assault.

A formidable gunship, the Storm Eagle mounts fearsome firepower for a vehicle of its size and is capable of transporting twenty Space Marines directly into the thick of an assault. The exact provenance of the Storm Eagle is unknown, but it bears clear similarities to the Stormravens employed by the Blood Angels and Grey Knights. Certain sources place the principal manufacture of the Storm Eagle upon Tigrus and Anvilus IX, both primary-grade Forge Worlds that suffered catastrophic damage during the Horus Heresy.


In recent decades the number of Storm Eagles in active service has begun to increase, especially amongst those Chapters known to have favourable relations with the Adeptus Mechanicus. This has lead some observers to believe that production has been restored at an as yet unknown location.

Designed by Stuart Williamson, the Storm Eagle is a complete resin and plastic kit which is packed with incredible design work, including a fully detailed interior. It is available to pre-order now for despatch from 27th April. You can also download experimental rules for this fantastic model from the Forge World website. 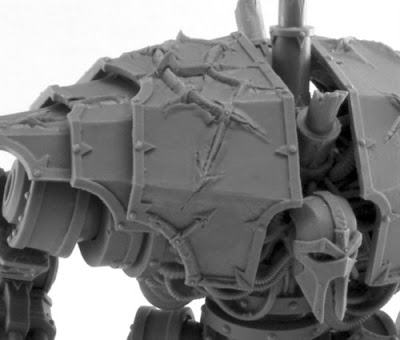 Decimator via Forgeworld
Towering over even the mighty, and exceedingly rare, Contemptor Pattern Dreadnoughts of the Adeptus Astartes, the Decimator is believed to be an attempt to bolster the ranks of such ancient devices that still serve the Traitor Legions on the part of the shadowed, now near-mythical, Legio Cybernetica. If this is the truth, then the warriors of the Imperium may well yet tremble before the might of this colossus.

Inquisitorial savants do not know for sure what unknown and malefic party are responsible for the sinful innovation of the Decimator Daemon Engine, which is capable of fielding a wide range of armaments.

The Decimator Soulburner Petard and Heavy Conversion Beamer, designed by Daren Parrwood, are finely detailed resin weapons for the recently-released Decimator Daemon Engine, experimental rules for which can be downloaded from the Forge World website now. These weapons are available to pre-order now for despatch from 27th April.
4/07/2012
Natfka
Announcements , Forgeworld