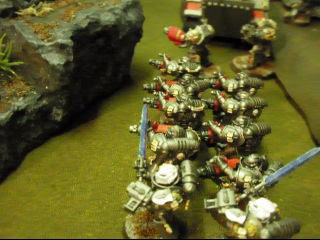 Easily dismissed, easily not acknowledged they are even in the codex, the Purgation Squad is another unit that is rarely seen in the lists of a Grey Knight player. I'm here to tell you that not only do these heavy support units compete, they deserve a spot in your lists.

Lets take a basic look at your purgation unit.
Purgation Squads are much like your standard devastator unit. 4 heavy weapons can be taken with 5 men. However, the weapon choices are not really good heavy weapon support as the distance they can be used at is 24".  Does Astral Aim make up for this? Not at first glance it doesnt.


Astral Aim.
A psychic power that allows for the Purgation unit to fire its guns at a unit that it does not have line of sight to. The big part of this is that you can take your 5 man vulnerable unit, and have them completely secured behind things, and still lay down a hail of fire at units within range. With Astral aim and a psycannon, pick out the units that already are going to recieve cover saves, or have something that enhances their cover saves beyond a 4+, as astral aim negates any bonuses.

The weapon choices are not as robust as a standard devastator squad. You have 3 options, and none reach further out than 24".

Incinerator:
Most people will say that this is the weapon of choice for the Purgation Squad. It allows 4 nasty flamers into your list that will take away the cover save. I see these as an average choice, that really needs additional models in the unit above the 5 that is standard. This is simply because if you are shooting off your flamers, you had best be able to handle a weakened counter attack. So some additional guys had best be there to increase your close combat ability. This greatly increases the cost of this unit. Unless you are designing your list with a full unit like this in mind, pass by the incinerator.


Psilencer:
Once again, a 24" heavy 6 weapon, that if you want to consider it, consider it on terminators that can move and fire heavies.


Psycannon:
This where the Purgation unit is going to find its niche for you. 5 guys is rather vulnerable, however the 24" assault or heavy firing weapon of the psycannon allows for them to follow other units into battle. Protected by scarier units ahead of them, and able to hide behind objects and still pick off targets makes the purgation stand out. I don't need to tell you the damage 4 psycannons can dish out. 16 shots sitting still, or 8 on the move.

Competition:
Competition is the reason you will rarely see Purgation Squads on the tabletop. There are much shinier objects to catch the Grey Knight players eyes. Psyriflemen Dreadoughts, and even Nemesis Dreadknights are the competing eye for this unit. While I love the Psyriflemen Dread, I have been finding them collecting dust of late, replaced by the lonely Purgation Squad.

Layout:
Standard 5 Grey Knights with 4 Psycannons. No need to upgrade the Justicar's weapon here, this is a shooting unit, that is behind your front line. He comes with a power weapon, you do not need much else. Make sure you add at least a rhino to this unit, so that on Dawn of War missions you can get them onto the field. These guys need to move forward or at least get into a fire support position and the early mobility is needed.


Tactics:
I tend to field full units of Purifiers. Take that into account, I rush my purifiers forward, (often with scout from a grandmaster). The purifiers deploy into any area terrain into forward positions in front or on the side of their rhinos. Behind that, the purgation units rhinos rush forward, and instead of getting out in front, the rhino turns mostly sideways and the purgation models get out on the the backside of the rhino to be completely hidden from opposing fire. (5 guys can hide very well behind rhinos.) The purgation squad will be using astral aim, so will not need to be able to see their targets to shoot at them.

From here they just pick off targets regardless if they are smoked or not (since targets will get a cover save anyways.)


This tactic of getting out into a nearly midfield position and not being visible to your opponent while you pick off a large amount of psycannon shots is incredibly useful. You are able to provide your own line of sight barrier with your rhino anywhere needed. If that rhino becomes a wreck, its a nice permanent barrier.

If you are fielding a librarian, they are also an excellent unit to summon forward and lay down a hail of fire, yet keeping them out of sight of retalitory fire.

I am using these 5 man squads in my lists. 5 unit purgation squad + rhino is 220pts. They are a finesse unit, as far as getting them into position and taking advantage of line of sight, but they are well worth their points. I know many of you will scoff at the idea of putting away your psyriflemen or your dreadknights. However a couple purgation squads really brings with them a tremendous amount of firepower, and if worked into your list will provide superior fire support for your Elite forward forces.
4/27/2012
Natfka
Grey Knights