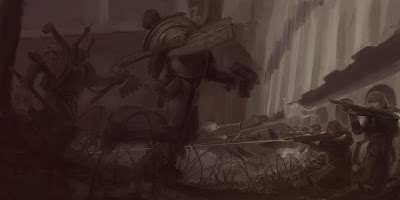 This weekend has been a full one, with the 2nd wave of Necrons being released and tons of rumors (leaks) depending on how you are looking at it.

Random Psychic Powers
The latest rumors have 6th edition psykers getting their powers randomly. I for one really dislike the idea of random powers or abilities for any army. It is the one reason that my Wyches are all thrown into a box to wait for some future addition of the codex, that probably my son will get to play.

Psykers have gotten to be a lot of fun in 5th edition, from the standard marine codex, Blood Angels, and now finally Grey Knights. The wide array of powers has let people customize how they want their librarians to function within a list, and it takes very little to balance this....... As psychic hoods and other powers limiting these abilities are abound.

I think it would be a sad day if all the powers were strictly random, and you had no choice in the matter. Especially when it comes down your characters. When modelling, some of us fanatics really do like to name our heroes, give them psychic powers that relate on how they want them to be. Randomness just seems to wash this out of characters.

Since I do not play fantasy, I might have to look into how they do their magic phases to get a heads up on psykers in 6th edition.


Rumor Mongers
Lately on Faeit 212, we have had a guest here named Grant. He has just of late been giving us little bits, or verifiying or not, other rumors that appear here. I think this is a great development, not just for the site but for the community at large. Many of the little bits are very exciting, are why we in fact like rumors. We really do not need much, but just tantalizing little fragments to keep us all foaming at the mouth.


6th Edition and Chaos Marine Rumors.
This last week has been bustling as Tastytaste seemed to open the floodgates on upcoming rumors. This next week and those to follow will be very exciting as we start to flesh out what our game is to soon become. I am very comfortable with 5th edition, and change is always rough.

Some of the latest bits of info include Close Combat weapons having an AP, vehicles with hull points, to Ahriman being a level 4 psyker. Other things I am getting excited about are traitor guard and cultists in the next Chaos Codex. Just this simple addition will probably make Chaos my next army.


The Dragon
Does the idea of a Dark Mechanicus creating daemon engines not excite many of us? I for one think it opens up a whole new world of ideas that Chaos will be able to employ. The standard dreadnought that no one ever used (random effects) becoming something all together more vigorous and deadly would be a great change for Chaos Marines.

The idea of infernal daemon engines is what I would see as an advancement on the idea of possessed vehicles. A corruption of the machine spirit the imperium holds dear. I can imagine a sect of Dark Mechanicus not only creating or corrupting these new engines, but feeding them when they are hungry.


Grey Knights
Well, if indeed 6th edition is right around the corner, I think I have wrapped up my final Grey Knights list. I have gotten the chance to play it now... (video coming soon), and really enjoy it. There might be a few minor modifications, but using a mostly infantry list with Grey Knights is where I am falling. Of course most units come with a rhino, unless they are meant to deep strike onto the field.

While I will not go into the list right now, you will be able to get an idea of it from the upcoming battle report that I am about halfway through editing.