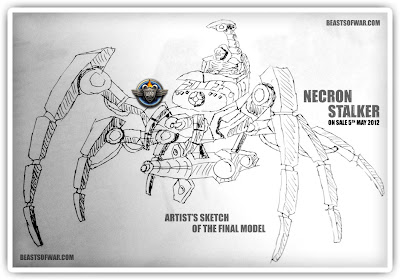 This is just in.... Horraaayyyy!!!! Just when people were starting to think it may never happen.

This is not an official announcement from GW, however they were able to get early Necron information last time, so it sounds solid.
via Beasts of War
The next release of Necrons are coming on May 5th 2012.


We don’t have any photos of the forthcoming release but we do have an artist’s sketch of the final Necron Triarch Stalker model. It looks very similar to the Codex art work and what allot of people have already built at home