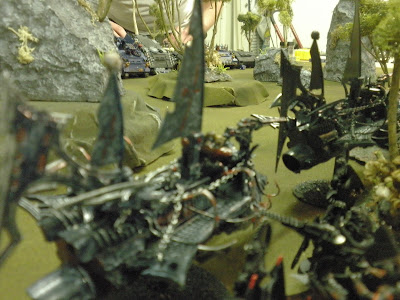 Well, I finally got the pics able to be uploaded from the camera. Not that they turned out very good, but at least I have some pics.

In our previous engagement, the Dark Eldar cleaned the field with the exception of a single Chaos Terminator Sorceror, who just refused to die. This game looked like it was going the same direction after 3, but the Night Lords were able to turn the tables.

First off, we had worked hard on the Night Lord list. We turned it into a plasma gun nightmare. There ended up being a total of some 30+ plasma weapons on the field. There were still 9 meltas and some heavies as well.  Going into the game, I was suffering already with the biggest issue of many Dark Eldar lists, kill points. I had a lot.

I was fielding a similair Raider list from last time with a few minor adjustments. This list is vulnerable and I knew it. One bad round at the wrong time, and poof..... there goes the field.

The first half.... Highlights
Asdrubael Vect
The dark eldar were hitting hard from the flank. Vect got mired down in the mud smelling the roses. He just could not get out of difficult terrain. An independent character rolls three dice when moving through difficult terrain, and that doesnt really matter when you roll three 1's. Running was no different........ nothing higher than a two. This kept Vect out of the entire battle. He was not able to keep up with the flow of the battle , and finally at the top of 5 killed two chaos marines.

Archon
My archon was a mixed bag. He was riding along with his 3 incubi, and of course got shot down by heavy weapon fire. The four of them were able to quickly tear apart a 10 man chaos marine squad the round they assaulted.

One of the highlights of the game, was a second backfield 10 man chaos marine squad that would of been in assault range at the top of four by my archon. However, the marines decided there was a better place to be, and decided to move through a wreck of a raider that had tried to tank shock them off the board. So they ran through the wreck, with the result of 4 of them dying to the wreckage. The resulting moral check for losing 40% during their movement phase was a failure... even with a re-roll due to chaos glory. So they ran off the board, effectively clearing the entire chaos backfield in 3 rounds.

Things started to go south here
The top of 4.... My archon and two surviving incubi assaulted a mess of a melee in the center of the field. Two units of scourges were locked in a combat. Both had feel no pain, and were becoming an problem for the Chaos Marines, but I was not able to kill enough of them to matter, and he was not able to win combat. That is until my Archon came along and lost it for them.

My archon was not able to reach combat, but two incubi were. With 6 attacks, two incubi with a pain token (FNP) killed a single chaos marine. The single marine that swung back at them was able to somehow slice into both incubi, failing both their armour saves and their feel no pain rolls, and kill them. I lost combat by 2. The giant center of the board melee, became the turning point. Both units of scourges fled, and two units of marines pursued. Neither scourge unit would be able to regroup the rest of the game, as the marines were able to continue the assault and push through to my backfield.

At this point things were looking bad. 10 terminators teleported in at the bottom of 4, with their terminator sorceror. A lash here and an assault there, took down more than enough warriors to wreck the field. The Chaos Marines were able to lock in an additional 7 kill points in a round. Most of that was simply chasing broken squads to keep them broken.

Analysis
My raiders had really plugged up his early game movement. The Night Lords had to push through ramming raiders, and got caught up in a tight mess at the beginning of the game. My failures at getting Vect into the battle and my Archons (incubi) disaster in the center of the field, was a huge loss. Otherwise the my list performed quite well. Tactically, I needed to get Vect and my Archon into the fray faster.

The Night Lord list performed well. My opponent pushed hard and played aggressive with his marines. Being able to get a bolter, bolt pistol and close combat weapon as standard weapons proved to be hugely advantageous in the battle. I really hope that chaos gets to keep this in the new upcoming codex. The large number of plasmas on the Night Lords side of things, did not do much to kill warriors, but did an excellent job of taking down Raiders.

Overall it was a close game, with pitfalls that should not of happened on both sides. The Dark Eldar just came out with the short end of the stick. One thing of note, Havoc squads loaded up with plasmas in a rhino, worked out quite well. 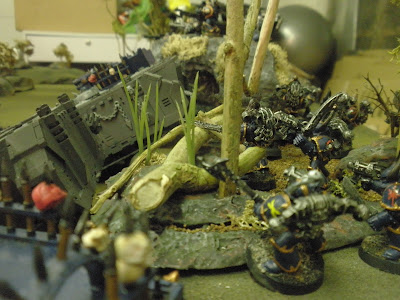 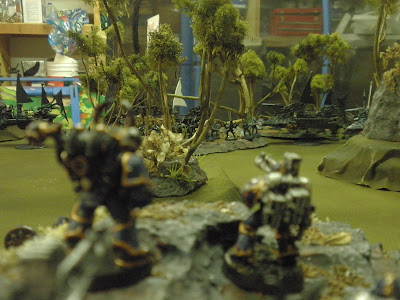 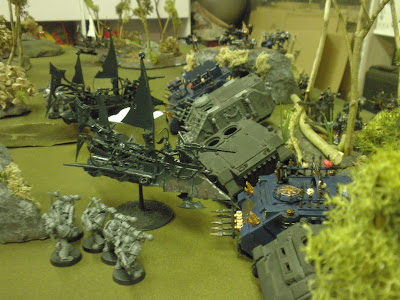