Home » Grey Knights » The Downfall of the Purifier: Part 2

The Downfall of the Purifier: Part 2 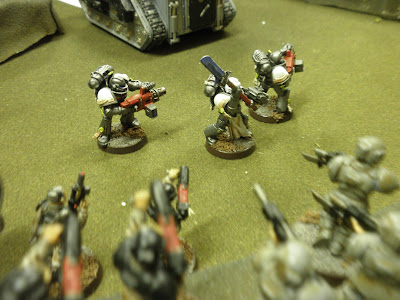 Yesterday I was discussing Purifiers, and why I am moving away from a Crowe oriented Purifier list. I have done extremly well with it, but it has some serious downfalls, that other more advanced players can take advantage of.

If you missed the beginning part of this conversation, you can catch up to it here,
http://www.natfka.blogspot.com/2012/04/downfall-of-purifier.html

Now, do not get me wrong, the Purifier is still probably my favorite unit type in the game. There is little that makes me smile more than unleashing the firepower of a 10 strong unit with 4 psycannons and 6 storm bolters onto a vehicle or unit. They are capable of fighting in all extreme areas of the game, and are only outmatched in close combat by dedicated units. So even though I am moving away from using 4 units of 10 with a Crowe style list, do not expect to see them fall out of favor in my army lists. Instead you will see me down to 3 full units, thereby filling my elite slots, instead of troops.

Lets talk straight numbers.
Not odds, just straight number of guys on the field. With a purifier list there just is not that many. Yes, you can get more than 4 units on the board, but its a serious sacrifice to do so. So 4 seems to be what I was fielding the most, alongside other things like dreads or inquisition etc. This makes the bulk of your force only 40 marines with a 3+ save.

That is just not good odds. Good anti infantry firepower is the bane of these lists. Rapid firing into purifiers is the sure way to get enough damage round after round, and a purifier/crowe list just cannot take these casualties. Continuous casualties just hurt too much.

In this regard, I have games were I have only had 1-2 guys survive in 2-3 of my 4 purifier squads. Some people will say, it doesn't matter, you either won or draw the games so it works. Well its not efficient enough for me. There are just better players out here than that. (I am extremly lucky to be part of a group that plays weekly and is full of the best players around my area). There just is not enough models to absorb the damage that comes in. One dedicated close combat unit, or lots of good rapid fire, and your strength is reduced by half in a single round. I do not let this happen, however good players find a way.

Range/ Mobility
Unlike other unit types in the Grey Knight list, Purifiers are simply stuck with transports to get around. It is vital to bring as much of your firepower forward into range as quickly and efficiently as possible, preferably so that you are stationary so you can get in the maximum number of shots off. By moving, a psycannon is reduced to half of its number of shots. While this is OK, most of the time, there are better ways to get your guns in line.

While you can throw purifiers into larger more expensive point costed transports, you are adding tremendous liabilities to the cost of your list. Stormravens, Land Raiders are excellent in my opinion when used well, but the are cost prohibitive in a Heavy Purifier crowe  list.

So you get low numbers, and against heavy shooting armies, you have to move into range (limiting your shots by half). This means often getting pummeled by rapid fire weapons, which really is the often the bane of the this army type.

Better Means to close the Gap
I had made a list I took to a tournament some time ago, that pitted 4 units of Purifiers alongside Mordrak and his ghost knights. It was extremely successful, purely by accident by what it did for the Purifiers. Perhaps not completely by accident... but when I started to analyze why this list did so well and its strengths compared to what other lists I was fielding it became clear, Mordrak was able to give more flexibility to my purifiers. He comes with Grand Strategy, allowing me to pic d3 of my purifier units and give them scout. This got them in close as they deploy within the 24" range of the enemy lines during a scout a move. There are other options, but that alone is a pretty powerful one.

Next Mordrak drops in and runs into cover when he arrives, thereby (since they have stealth) making them extremely hard to get rid of. If you choose a good spot for their round 1 deep strike, they are extremely annoying to get rid of. What did this do? It allowed the purifiers to get in close, and unleash. It was simple, and overly effective.

Now I do not like Mordrak in general, as I do not think he is all that efficient in points. So taking the elements that Mordrak brought into the list that worked.... Grand Strategy, dropping a unit of purifiers (can only take three elite choices), it opens up a world of quick fast moving Grey Knight units.

Other unit types can deepstrike, teleport across the tabletop much faster than purifiers. This gives my purifiers a greater opportunity to be more flexible with the addition of Grand Strategy (you have a great number of options depending on mission and opponent). So in this regard, the addition of two Grand Masters will cover your list (my new list I have been working on) quite well. Two Grey Knights Grand Masters also come with psychic communion, thus giving you great control on how reserves work with your list. Psychic Communion allows you to modify your reserve rolls after they have been made by +1 or -1, and they stack. Personal Teleporters also allow for fantastic movement, which means that a grey knight army can be mobile and strike with full force rather quickly and with greater numbers where ever they are needed on the field.

Greater flexibility, quicker means to close the gap and be in range, a greater number of models on the board, and control of reserves. Going down to three units of Purifiers with these benefits becomes a no brainer.