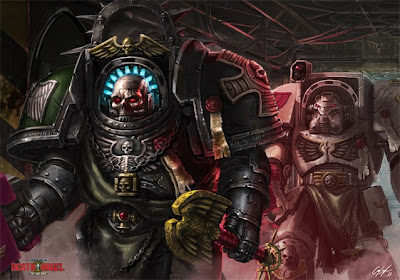 This rumor will throw you for a loop, No Chaos Legions........ at least this year. Instead this rumor set today calls today for Eldar hitting the second half of the year.

Lets talk other sources and on how they clash. Harry at the very beginning was saying that Eldar were going to be in the mix of the starter set, but then changed his opinion when Hastings declared Dark Angels and Chaos were the starters. Other rumors have firmly placed Chaos as coming this year, so when it comes to this rumor, its going to need a lot of salt to swallow this.

I do think we are going to see a codex in June, however even if it does end up being Dark Angels (50/50 vs Chaos), I do not think that would give credence to this rumor about Eldar coming this year.

Please remember that this is a rumor, and grant it a ton of salt.

via drbored
I got a rare opportunity to ply a wealth of information for some knowledge and insight about what's coming up next/soon.
Here's the rundown...
Dark Angels (May/June)
6th Edition (July/August)
-Starter Box featuring Dark Angels vs. Eldar
Eldar (Oct/Nov Xenos slot)

And somewhere in that mix is going to be a splash release of fliers that *should* include the Harpy, Voidraven Bomber, Doom/Night Scythe, and possibly more. When I mentioned 'Autumn of Fliers' I got a derisive snort, so we may see it sooner, we may see it later.

This confirms two things:
1. It's not going to be Dark Angels and Chaos for the Starter Box. GW is NOT going to put two power armor armies in the same box. Power armor is their bread and butter, and to put two power armor armies in one starter box doesn't follow any trends, going back to the Rogue Trader days. It *may* be Dark Angels vs. Tau, but my source suggested Eldar strongly for several reasons.
-A. Eldar is a girl-getter. It's the one army that attracts more girls to the game than any other.
-B. Eldar is currently the worst selling army.
-C. Eldar has a massive loyal fanbase.

Eldar are the logical step, and now they're the rumored next step in this coming Xenos season.

2. Chaos is not going to be coming out this year, but may be slotted for early 2013. This is good and bad... bad because we don't get Chaos sooner. Good because it means Chaos will be a true 6th edition army, and not a 'made for' 6th edition army. This will put more time between the release of the rules and the finessing of the Codices, which means a better 6th edition Codex for Chaos. We could, of course, get a surprise, where they slam in a new Codex into the year, but that doesn't trend either. My source suggested, however, that we may see a lot of 'splash' releases packed in, with the aforementioned fliers being one.

As for my source, of course I can't reveal him. It'd be a plain disservice to his trust. What I can say is that he is a wealth of knowledge about all things GW, Forgeworld, and Black Library, and has many contacts therein (and I don't mean GW store managers. I mean Codex and BL authors, and GW and Forgeworld sculptors).

I would be very surprised if I was proved wrong by the passage of time and the developments therein, but such is the nature of the future. Take it or leave it, but I'm confident that you shouldn't have to take too much salt with this.

via Eldargal
I've been told that Eldar have been the 2nd or 3rd best selling army after Space Marines in general and Imperial Guard (depending on the codex) since the 90s, from a variety of reliable sources over the past year (including past and present high-ups in GW). The idea that they have suddenly become GWs worst selling army strikes me as somewhat ridiculous. Not to mention B and C woudl basically contradict themselves, how would GW know Eldar have a huge fanbase if they don't sell well and why would they not sell well if they have a huge fanbase? Very few of the kits are dated to the extent you see in some other ranges and the plastic kits are abundant and excellent.

I've also been hearing from a few reliable rumourmongers that Eldar are firmly slotted in for next year, which doesn't necessarily mean they won't be in the starter.

I'd like for these rumours to be true but I can't help but be very skeptical, too much of the reasoning seems like speculation and assumptions.

Also, as for Eldar being a 'girl-getter' this seems to me like more fan speculation. Obviously I only have anecdotal evidence but I know close to thirty female games online and in person and Tyranids are the most popular choice, with Eldar, SoB, Orks, IG, DE and SM all being roughly equal.
4/17/2012
Natfka
Chaos Space Marines , Dark Angels , Eldar , Rumors