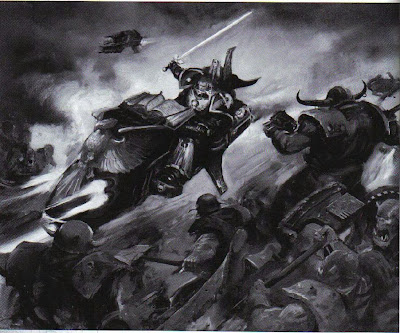 Last night we were given that the Dark Angels are at the printers. The question then becomes what time frame does that give us. The rumor itself was telling us that we would see the Dark Angels codex in May / June. If you missed it here is the link....
http://www.natfka.blogspot.com/2012/04/dark-angels-next-for-mayjune.html


I think there are a couple things to look at when reading a rumor like this... First off, the source had just heard from a family member that the Dark Angels were at the printers. There are a couple things to consider.
1. Did they just get there? Or have they been for a month or two already?
2. Whats the delay from getting the books printed to the time we see a release?

I say that because we heard a couple months ago that Chaos Legions was at the printers. With my short term memory problems, I had completely forgotten this. Its very possible that the soure of yesterdays rumor simply doesn't know the time frame of how long it takes to release the book after it goes to the printers.

Lets look at this comment by Darnok on the subject.

To add my own doubts: I think the rumour is genuine, but some things have been got wrong. A book "being at the printers" usually means that it is three to six months away. That would of course fit the "in the next couple of months" line, but I don't see DA as the next release. As others have pointed out, Chaos had its printer rumours a few months back, so I would put my money on them being next. If I had any money to bet that is.

Its very possible that this means the Dark Angels codex is set to be released this August/ September rather than in the next month or two. Then we would see Chaos Legions May/ June.