Home » How we play the game. » The Plasma Gun: Blast from the Past

The Plasma Gun: Blast from the Past 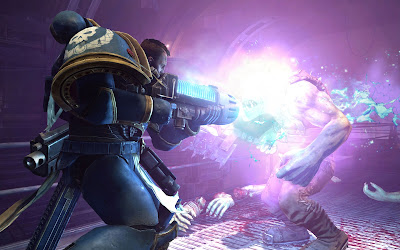 I thought I would hit a topic today that I have a lot of opinion on, the plasma gun. A lot of people have noticed that I like the plasma gun, and I have noticed how hesitant people using them in their lists. That makes it an excellent topic to get out onto the table.

Since I have hit this topic before, this is a post I did nearly two years ago on the subject. Since it still is valid, its a rinse and repeat scenario. Old post with some additions.

Plasma is as temperamental as are the arguments on their value and whether or not they should be put into your army lists. Some people love them, and some people just cant stand the thought of losing a 16 point or more marine plus the cost of the gun, when it overheats.

Plasma Guns. When it comes down to their use, you'll have to count me along the fan base. Losing a couple guardsmen really isn't that much of a deal to me, if the enemy is close enough for me to use them. I will probably be losing those guardsmen anyways, so they need to kill something reliably. I often use them in veteran guardsmen units, so 3 plasma guns is getting me rapid fire shots. How can you not love the damage that is about to rip into the enemy. In a tight spot, they can even destroy a vehicle. Now a marine with a 3+ save, is even less likely to die due to melt down, so its not so much of a big deal to them. As for their damage, models die in waves to my plasma guns on the table, since I tend to field more than one unit of them. You only have 5-7 rounds of play, I believe in shooting something and it dies.

Plasma Guns have a 24" range firing single shots. This enough to threaten light armour, hurt or kill monstrous creatures, and do enough damage when done in mass to small units. 24" is a decent range, and if you are able to get a unit within 12".... double tapping them is incredibly effective.

Chaos Marines: Some units like Havocs or Chosen can take 4-5 plasma guns per squad. Even combi-weapons are effective in this army. There is no other gun that gives you such armour piercing value with so many shots. A chosen unit dropping 10 plasma gun shots into just about anything is going to hurt, or wipe out what it hits. Overkill? Not likely, when you take into consideration cover saves or invul saves. Its dead. Now lets move onto the next target.

Chaos Terminators: Now this is fun. 10 Terminators with combi-plasmas. You do not need to use all of them in a single round. Fire what you need. Remember that you are relentless in that armour, so you can assault after rapid firing into the enemy, just in case something is still alive. This works even better when using lash of submission.

Imperial Guard. Groups of 3 are quite easy to get in veterans. Stick them into a chimera, and they are quick and flexible on the battlefield. Into company command squads, 3 or 4 of them can be used. A medic will give them feel no pain, however, I'm still going to use 4 in the squad personally. Nothing like 8 str7 ap2 shots at BS4 to slow down the enemy. Can you say dead monstrous creature. Don't forget to take leadership tests though if you lose 25% of your own unit. I tend to field 2 veteran units in chimeras with plasma guns, and 2 with melta guns. Other plasma guns are found in command squads, and guardsmen retinues with inquisitors. My Faeit 212 army list fields 11 or 12 plasma guns to punish an enemy that gets in close to my chimeras.

Blood Angels. First thing I saw, Honor Guard can take 4 plasma guns. They radiate their feel no pain and furious charge up to 6" so I didn't want to send them into the fray, but instead weaken up the enemy as my fast moving assault troops moved past them into the assault. Just throw them into a transport to have them keep up.

Plasma Cannons. This is where I hesitate. I'm not a fan of a small blast template. I mean really... Unless they just got out of their transport because you blew it up, or your playing a noob, you are only going to maybe kill one model. Good and smart players know to spread out in front of blast templates, and a small blast only gets 1 model, unless you scatter perfect. Now, because you are scattering, unlike a plasma gun, if you roll a 1 you simply miss (if you are not a vehicle) and overheat. Where a rapid fire plasma gun, still fires it other shot, a plasma cannon roll of a 1 simply overheats and you miss. For me plasma is a do or die weapon, having two shots makes all the difference in the world. Since Plasma Cannons are a small blast, and well, small blasts are going to kill hardly nothing (1 guy), I'll pass on these, as I tend to kill more with plasma guns. As far as putting them on armor goes, well, this is where some people like them, I'm somewhat inclined not to use them, but it's still a small blast template to me.
4/04/2012
Natfka
How we play the game.