Home » Grey Knights » The Downfall of the Purifier

The Downfall of the Purifier 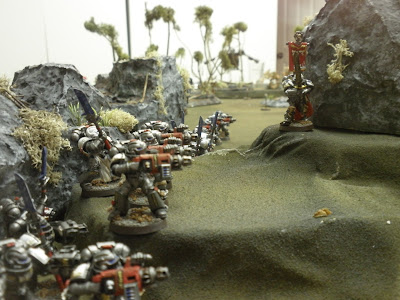 Many many games later, I have finally been able to wrap up my conclusions about purifiers. I believe now I have played a Purifier list against about every army type out there and then some. Even though I love the unit, and it just may be my favorite unit in the game, it has some serious drawbacks.

First off, lets establish a baseline. By a Purifier list, I am talking about one fielded with Castellan Crowe, 3-4 Purifier units, and the standard 2-3 Psyriflemen Dread in the backfield. Everything else is variable depending on point level and your flavor of the month.

Extras I have fielded have included assassins, Inquisition units, Mordrak, Librarians, Techmarines, Storm Ravens, Venerable Dreadnoughts, Coteaz, and probably a few others in that mix. Its really hard to quantify the number of games, but its easily 30-40+.

First off, the benefits of the Purifier.
Lots of heavy firepower. I field this unit almost exclusively with 4 psycannons, 5 halberds, and a Daemonhammer. So standing still, anyone within 24" will be hit by 16 psycannons shots, and 12 storm bolter shots. The unit comes in at 295pgs, which takes it up to 335 with transport.

This unit an take close combat, however, it will suffer greatly to those dedicated to it.....ie assault terminators. So while assault works great, with purifying flame or hammer hand, close range shooting is where its at.

What I have done often do deal with close combat specialists or hard core hammer units is a techmarine in the forward units against a heavy assault. This generally stops it dead. Of course you are using Rad and Psychotroke Grenades. This along with a purifiers psychic powers is enough to stop most spearheads. I enjoy using one techmarine to stop any onslaught, but two in separate units works wonders.

The psycannon........
I cannot tell you how many times armour 14 has went down to a single unit of 10 purifiers. A lot. In fact I have not yet had one reach deep into my ranks as they have always died the first time they approach my purifiers within 24". The weakness of the psycannon if it does indeed have one, is against units with feel no pain. I had a game against  a Blood Angels jump pack list where I killed three marines with 4 squads of 10 purifers all shooting at it.

Nemesis Force Weapons
This part is quite annoying, as even though I know forceweapons are exciting and can kill multi-wound models, it so very rarely happens. Most of the time, for example against tyranids, there is some beast there that either is able to negate your psyhic power with 3 dice or there is a hood that beats you down. Just being power weapons of course has killed a plenty, but I think I have gotten off maybe 2-3 kills on multi-wound models over all this time.

Halberds are the cream of the crop. Really initiative 6 is wonderful. What is often funny is how 5 halberd wielding purifiers tend to kill so little, but its still a great weapon. With this unit, shooting is still the most preferred in most circumstances.

Force swords. I find it odd that these are not used more often. I think they are wonderful weapons. I prefer halberds for my purifiers because they are so dirt cheap, however strike squads etc just retain their swords for cheap killing. I prefer my halberds cheap. Anything not free had best not cost 5 or more pts per model.

Daemon hammers.... You've probably already heard this here before, Do Not put your single daemon hammer on your knight of the flame. A single perils caused me one of the extremely few losses with this type of army I have had. I lost my daemon hammer to double 1's, and failed to hold my objective. I needed to blow up a drop pod at the end of 5. Amazingly shooting failed and then perils on a knight of the flame with the only daemonhammer on the assault.

Morale
Where other units fail here, Purifiers rule. I have played years of Imperial Guard, and I love using morale to beat up tough units. Battle Psykers lowering the leadership of big units is hilarious. I cannot tell you how many times I have ran Paladins off the board. Its embarrassingly fun to do this.

Purifiers do not have this weakness. Being fearless stops things like fear of darkness, or other effects that have the opportunity to take reduce leadership and make you flee. This makes purifiers the ultimate unit for holding their ground and getting them where you want them. Too often I have had a transport blow up, only to have the unit pinned down at the exact worse time of the game.

Apparently this needs to become a two part. Next I will discuss why I am moving away from a Crowe/ Purifier list.