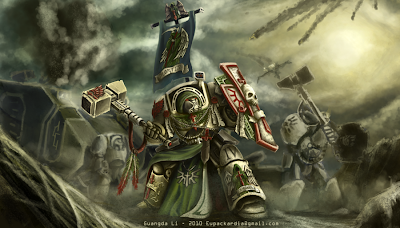 This morning we get to wake up to some Dark Angel bits. Now these are saying that Chaos Marines is next, but that Dark Angels will be sometime in the fall. I suppose that would make Chaos coming very soon.

Please remember that the following are rumors, and need to be taken with a good unhealthy amount of salt.

via MarikLaw
I don't post rumours very often as I can't trust half the stuff I hear, but I believe this was worth noting after I saw some of the recent BoLS rumours.

Please take these rumours with a grain of salt, never met the guy who told me this stuff before in my life but he seemed to be pretty confident about what he saw (or heard). I work in a gaming store so I tend to hear rumours all over the place, bought a 50/50 chance that any of them are ever true.

- Dark Angels will NOT be released prior to 6th Edition. Expect them after Chaos Legions, sometime this Fall (apparently Chaos Legions is being released shortly after or in tandem with 6th Edition). I believe the credibility of this (at least as far as the Dark Angels go) is pretty good, especially if we speculate on when the White Dwarf spine image of the Dark Angel is going to finish.

- Company Masters in Terminator armour will apparently be able to take a single Deathwing Terminator squad as Troops and a Company Master riding a bike will be able to take a single Ravenwing Attack squadron as Troops. Belial will let you take any number of Deathwing Terminator squads as Troops and Sammael will allow you to take any number of Ravenwing Attack squadrons as Troops. I'd rather see both units as Troops choices right off the bat, but if the recent Chaos Legions rumours are true than this seems all too likely to happen as well.

- Dark Angels will have Mortis Dreadnoughts as Heavy Support choices. Sounds like wishlisting to me, but would be nice if it was true.

- Person seemed to confirm some of the other rumours that have been floating around about Chaplains, nothing new or interesting to report from that though.

- Cypher will NOT be in the Dark Angels book, but will instead appear in the Chaos Legions book.

- Some sort of new Predator that has a plasma weapon as its main armament. Sounds like wishlisting again, but could still be cool if true.

- He also seemed to confirm that the Dark Angels would have an affinity for plasma weapons and that they would be slightly better than in other Marine books, but wouldn't say how. Sounds like rumour rehashing, but if not it could confirm some of the other rumours that have been floating around.