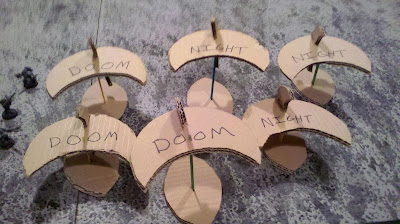 So with the latest rumor set giving us a 2nd Necron wave, one has to ask, just were are those flyers. Especially when it comes to our transport the Night Sythe. At this time there are two ways to look at it.

1. They just were not mentioned yet, and are going to be apart of this wave.
2. They are being held for a later release with more flying vehicles for what has been mislabeled the "Autumn of Flyers"

Personally I don't know which it is, and I am going to ignore the idea that they are just not going to be done anytime in the near future. I would like to think that the rumor is yet another indication that we will be seeing a big flyer release coming up sometime right after 6th edition, however that is rather speculative. I suppose only time will tell. We should start seeing information this coming weekend on what May will bring us.

The picture above just cracks me up. I beleive it was taken by Weirdboy.
4/16/2012
Natfka
Necrons , Rumors