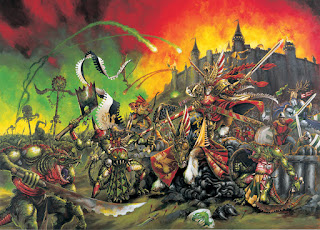 This one I find hard to believe and I see it as "cant see this happening" for the simple reason that it would be a nail in the already dead game's coffin. The rumor has it that the Old World will be moving to a different scale and will not be 28mm.

I don't believe that this rumor is true in any regards, but since its out there its worth taking note and hoping that GW gets our feedback.

Warmaster was a fun little game that never really made it.

So what do you think. Would you be interested in the Old World if it was brought back at 15mm or smaller?

Personally I think if this happened it would just piss people off. Perhaps the rumor not geared towards the Old World Warhammer Fantasy return but instead discussion of a new Warmaster?

"We heard from an industry insider there are some serious signs pointing to the scale of the game being smaller, either 15mm or 8mm."