Updated: 40,000 Crossover to Magic the Gathering! 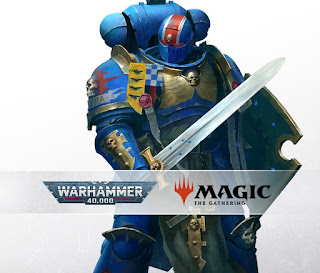 Big announcement today coming from Hasbro about new partnerships that include Warhammer 40,000 with Games Workshop and Magic the Gathering. Hmmmm. Something big brewing.

From the Wall Street Journal
https://www.wsj.com/articles/dungeons-dragons-gets-a-bigger-role-at-hasbro-11614254403

Here is WarComs Announcement which came later today.
Here is the Update

Warhammer is the world’s biggest name in tabletop gaming. Magic: The Gathering is the number one fantasy card game. So, what happens when you smush them both together?
The answer can be found in Universes Beyond, a new premium card set for Magic: The Gathering which sees the game’s creators teaming up with some of the world’s biggest storytelling brands – including Warhammer 40,000.
It’s the latest in an illustrious line of recent partnerships that have seen Games Workshop collaborate with the likes of Bandai, McFarlane Toys, and Marvel Comics to bring the worlds and characters of Warhammer to life like never before.
Universes Beyond will bring the mighty heroes, twisted villains, and fearsome xenos races of the 41st Millennium to glossy cardstock. For Warhammer 40,000 fans, it’s a chance to command the forces you know and love in an entirely fresh way – while cooing over some lavish new art, too.
And for Magic: The Gathering fans, it’s an opportunity to discover a rich universe of galactic conquest and betrayal that’s been shaped by decades of games, novels, and media.
When can you get your mitts on these cards, we hear you cry? Well, they’re a little way off yet, but you can rest assured that Warhammer Community will bring you all the latest news on this card-based collaboration.