Death Korp Gone for Good or Getting Redone? 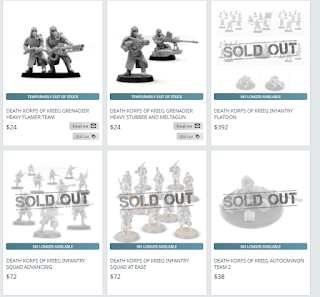 So much of the Death Korps is listed as temporarily out of stock its surprising to see their core units listed as no longer available. Did we have some rumors of these miniatures getting redone? Wouldnt that be cool.
Death Korps is such an iconic guard infantry it would be something cool to see in the near future. Complete speculation though.
See here on Forgeworld
It would suck that with so much of this miniature line on Forgeworld listed as Temporarily Out of Stock that it would not be redone.
2/09/2021
Natfka
Death Korps of Krieg, Warhammer 40k