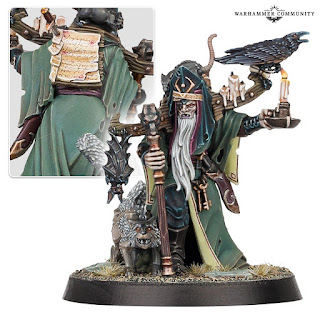 Check out his backstory...

via WarCom
https://www.warhammer-community.com/2021/02/18/meet-the-scientist-itching-to-experiment-on-you-in-warhammer-quest-cursed-city/
Last week, we met Qulathis the Exile, one of the heroes seeking to lift the curse upon Ulfenkarn. Today, you can say “hello” to Torgillius the Chamberlain, a so-called scholar performing depraved necromantic experiments to raise more warriors for the Ulfenwatch.
Ulfenkarn was once home to the brotherhood of sepulchrists known as the Pact Mortalis. Torgillius was a member of their order but turned his back on them, taking their research into grave-sand phylacteries and throwing in his lot with the vampires that came to rule the city.
The chamberlain’s knowledge of grave-sand means that his master can now deflect wounds that would otherwise destroy him, making Torgillius one of the most trusted men in the Cursed City. He has also developed the ability to project his will into the diseased vermin in the city, allowing him to spy upon the populace.*
While Torgillius usually prefers to dispatch lesser beings to fetch him fresh subjects for his experiments, he will occasionally venture out into the city to choose his own. Any who stand in his way suffer the full might of his dark magic.**
2/18/2021
Natfka
Warhammer Quest Cursed City